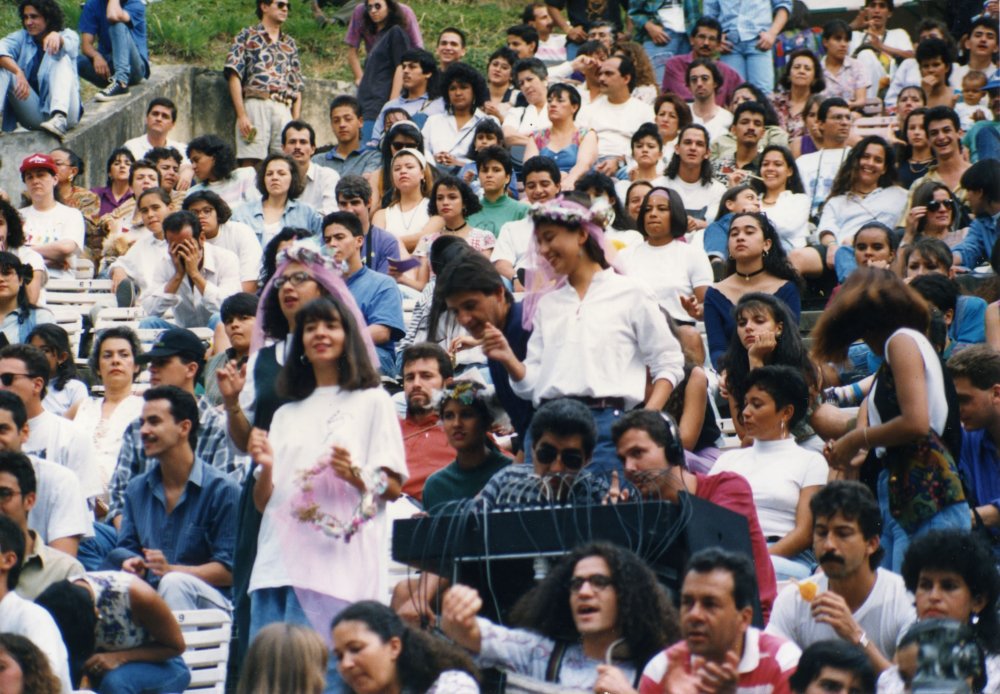 The III International Poetry Festival of Medellín takes place between June 2 and 8, 1993; it is called and organized by the review Prometeo. The opening reading takes place in the Teatro Metropolitano and the closing reading in the citys amphitheater, the Coliseo Cubierto. A total of 25 poetry readings are scheduled in all parts of Medellín and there is a program of 12 alternative activities consisting in exhibitions of visual poetry, which present the historical development of this expressive form of signs; there are also musical shows based on poems of contemporary and past authors.

They take part in 25 poetry readings in auditoriums, halls and parks, and, as a complement, there are concerts, exhibitions of paintings and lectures on poetry, in 12 other venues of the city, with an approximate audience of 50,000 persons.

Poets of several generations make the printed word of their poems sound aloud, showing a transformation in the dream developed and prolonged in lifes journey by the imagination.

It has a real impact, a miraculous intervention in the street, where poetry returns with all the strength of representation and symbolization.

We can assert that in this version of the Festival its effectiveness became evident, through its capacity of intervention in the reality of the city with a new air, with a new light for the sorrowful spirit, and to spread a new joy of living in spite of the explosions and the debris. We know that poetry does not solve the structural problems, but without it human beings would perish in absolutely helplessness, slaves of their precarious activities, shocked by clichés, and mired in the stagnation of life in the industrial society.

Poetry is taking the space between bombs and flowers, there where hope is so explosively necessary. With these words the Brazilian poet Affonso Romano de SantAnna referred to what he, as a participating poet, perceived in the intense days of the Festival.

Assistance is so large that one can not quite understand its dimension, its attentiveness and generosity. On this occasion, new features are added to the Festival; space is given to the participation of poets from many more countries (compared with the previous one), and the first steps are taken to transform it into a real world event.

The Festival opens like a flower charged with future, pointing out a very high form of the collective spirit, a nourishing ground of visions, a stage for new possibilities of the word. What is interesting in the massive attendance is that its participation was fundamental in the dialogue between the others being which is ones own being spread in voice, song and dance, breaking with the mirrors of commonplace and without the dissipation offered by massive events designed only to entertain and manipulate the audience.

The III International Poetry Festival of Medellín marks a spiraling growth, surpassing the two previous ones because of its dimension, its social hold (readings in the neighborhoods), the diversity of poetic tones, themes, techniques, forms of communicating poetry and the alternative schedule.

It is a truly revolutionary event, in the sense of its poetic vision and its application on society; in its poetic action springing from a thought about culture and its fostering of a collective participation where there was only desolation and dejection before.

From that time on, Medellín begins to take shape as one of the world capitals of poetry. Thus is unchained with greater force the scope and promising sense of this event, which since then received a more definite sponsorship by the Municipality of Medellín, in accordance with the Bill 39 of 1993 of the Municipal Council, and of the Instituto Colombiano de Cultura (Colcultura), which later became the Ministry of Culture.

Since the III Festival it was decided to hold the event in the month of June of each year, when we are nearer the sun.

The year 1993 marks the consistency of all our activities. From that moment on we saw the need to strengthen further our basic structure of work, and we began the planning and organization of the IV International Poetry Festival of Medellín.