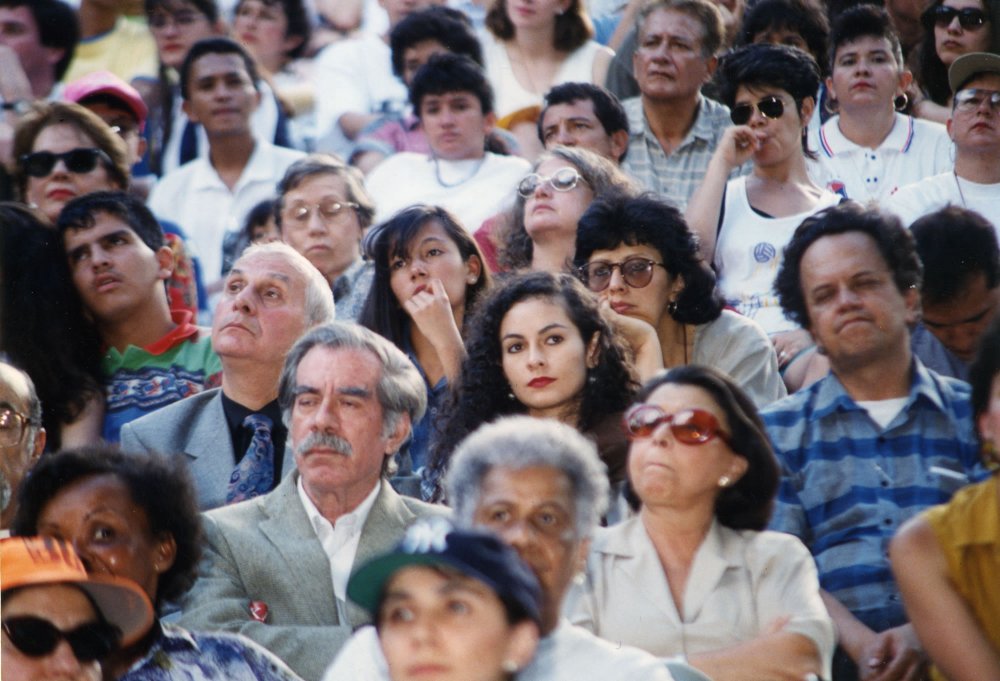 With the audience the poets Henri Deluy, Juan Calzadilla and Blanca Varela

The Prometeo review holds the IV International Poetry Festival of Medellín between June 2 and 8, 1994. It is opened in the Teatro Metropolitano and closed in the Teatro Carlos Vieco of the Cerro Nutibara. In the country, the political, economic and social crisis keeps on growing. Great sectors of the population feel excluded from an active participation in the vital processes of the city, and marginalization increases rapidly.

There is an exhibition of sculptures by master Edgar Negret. The Arts Workshop performs Gestures to people silence, versions of poems for deaf-mutes, written by Samuel Vásquez. There are 27 poetry readings, four exhibitions, a lecture and a poetry and theatrical show. Events are held in 35 venues of Medellín and two other cities of the Department of Antioquia, with an assistance of 50,000 persons.

This is the beginning of the realization of a dream, which is that poetry influences life of society, that human destiny can become more poetic, that it can be filled with content, with sense in the midst of the difficulties and uncertainty about the destiny of the world and of humanity.

Poets of high standing visit the city to maintain alive the torch of poetry. They accept to come because word reached them of an experience that has to be lived directly. They accept to come not heeding the black legend of Medellín. From this experience the general spirit that stimulates this Festival emerges strengthened, given the increasing number of listeners participating with an ear ever more alert and refined, as well as an attitude more selective toward the quality of the poems read.

The audience sees, more than ever, that poets do a very singular work: to go into the trance of words and to awaken the conscience of the world, of the marvel of the world and the existence of living beings, of memory bringing to the surface submerged worlds.