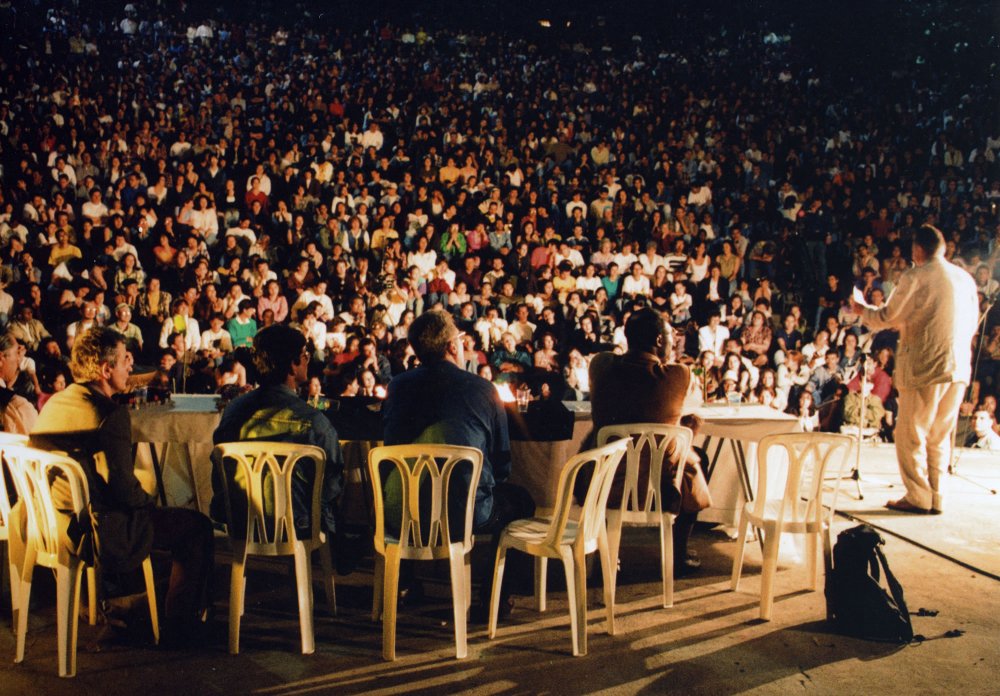 The VII International Poetry Festival of Medellín is held between June 13 and 21, 1997. The symbolic phrase that is the motto of the readings this year is Cocteaus verse, A great Spring maddens the veins.

The VII Festival, with its 42 readings, widens its range together with the II Poetry School. The poets deeply touch the audiences. Notable is the presence of four Arhuaco shamans from the Sierra Nevada de Santa Marta, and their interest in making known messages which are fundamental to preserve the earth.

In the broad Summer solstice, Medellín becomes a poetic center of the world between 6:40 PM and 10:15 PM. The audience that packs the Carlos Vieco theater transforms itself into the metaphor of the greatest wish to love. The poets, enlightened by the verb, go on record saying aloud their gratitude for having been allowed to penetrate in the heart of a city that lives a need of communication and tolerance.

The Russian poet Pavel Grushkó said that in Russia there are no more poetry readings in the stadiums and it seemed to me that I went back to something beautiful that I used to have in my country.

So many people united in silence manage to write a poem between June 13 and 21, on sheets of paper, where each one writes a verse. The final result is a long poem dedicated to the city. This makes possible a conscience of the poem as a collective creation and asset of everyone.

The Italian poet Giuliano Scabia says in this occasion in a Colombian newspaper: Suddenly an image comes to me: De Vulgari Eloquentia by Dante. Yes. All the languages of the world, through translations, are the mother tongue. My mother tongue, that I learn. And I think: my mother tongue is the dialect of Padua (my arhuaco) together with Italian, but my mother tongue is also all that corpus of mixed languages/poems, of roads that meet. I feel now the nobility of poetry (its being the voice of the world classroom). And that poetry is not here a shy and sad phantom, but a young goddess, dancing in the ferment of the world and keeping alive the vitality of language". This is perhaps what Vajpeyi said in the great Teatro Metropolitano: This is the first time that I am not ashamed to be a poet, and perhaps this is also what the boy that asks for an autograph, not to a football placer, but to a poet, thinks: that before everything comes language, guided by poetry.