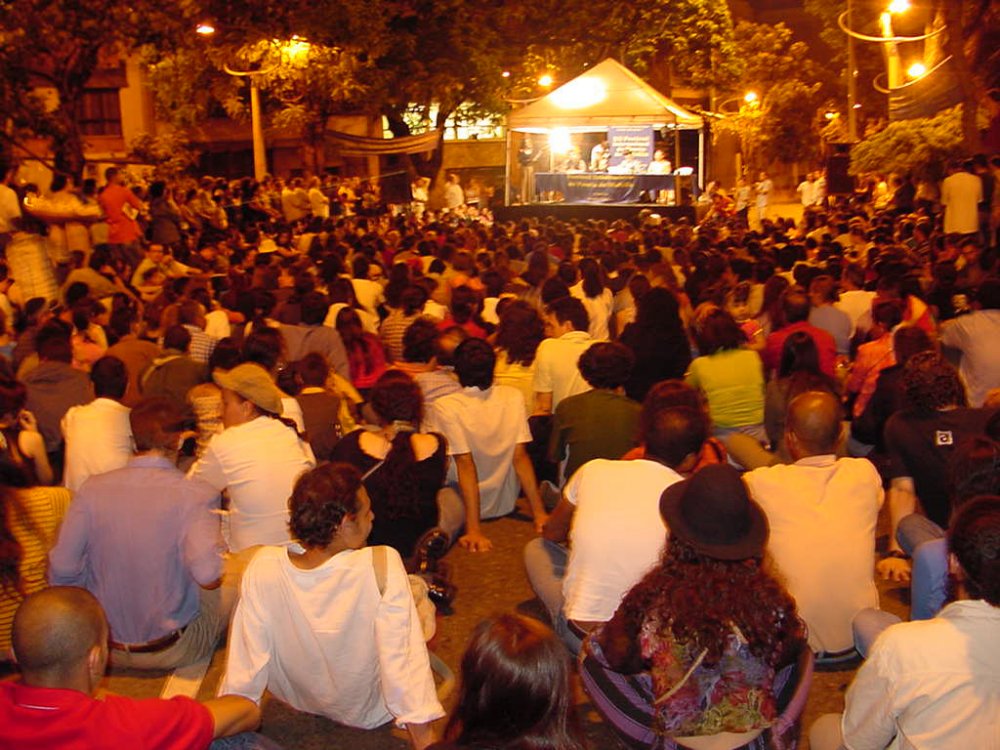 Overcoming serious financial difficulties and the unprecedented worsening of law and order in Colombia, due to the internal confrontation, the XII International Poetry Festival takes place between June 21 and 30, 2002, on this occasion with the presence of 70 poets from 54 countries.

Some 180,000 persons, mostly young men and women, attend massively 101 poetry readings in Medellín and 25 Colombian cities, confirming their extraordinary certainty in the liberating power of poetry, and they massively commit themselves to preserve this annual event, one of the main poetry festivals of our time, threatened by the transfer of funds from culture to war by decision of president Pastranas government.

The deliberate disregard and playing down by most national and international media of the preparation and celebration of the XII Internation Poetry Festival, in a city where 50,000 persons have been murdered in the last decade, must not go unnoticed. It seems to show that, ambiguously, in the news from Colombia is more important to highlight the explosions and the destruction, than the increasing mobilization of spiritual forces demanding the reconciliation of Colombians, through a process of creative dialogue between the guerrillas and the Colombian government.

The International Poetry Festival of Medellín has confirmed again that this event is more than an open and free dialogue between our people and some of the main representatives of the poetic traditions of the world. Our people, and mainly our young men and women, need to deepen their knowledge and experience of poetry and of its vital breath, to strengthen a life continuously threatened by hostile forces, to bring together the radiant powers of imagination, to exalt life in a time of darkness, and to affirm their trust and dream of a high and just motherland for life and the spirit.

Parallel to the event, the VI School of Poetry of Medellín takes place, in which the following courses are offered:

Encuentros disparadores, by Serio Lima (Brazil).
The Orígenes group, by Jorge Luis Arcos (Cuba).
The Haiku, by Satoko Tamura (Japan).
Ceramics: Expressive Possibilities of an Ancient Craft, by Celia Cymbalist (Brazil).
The Poetic and Pedagogic Spirit in the Life and Work of the Liberator Simón Bolívar, by Juvenal Herrera (Colombia).
"Central America Women Poets, by Amanda Castro (Honduras).
Additionally there was lecture on the History of Dadaísmo by Jotamario Arbeláez (Colombia).