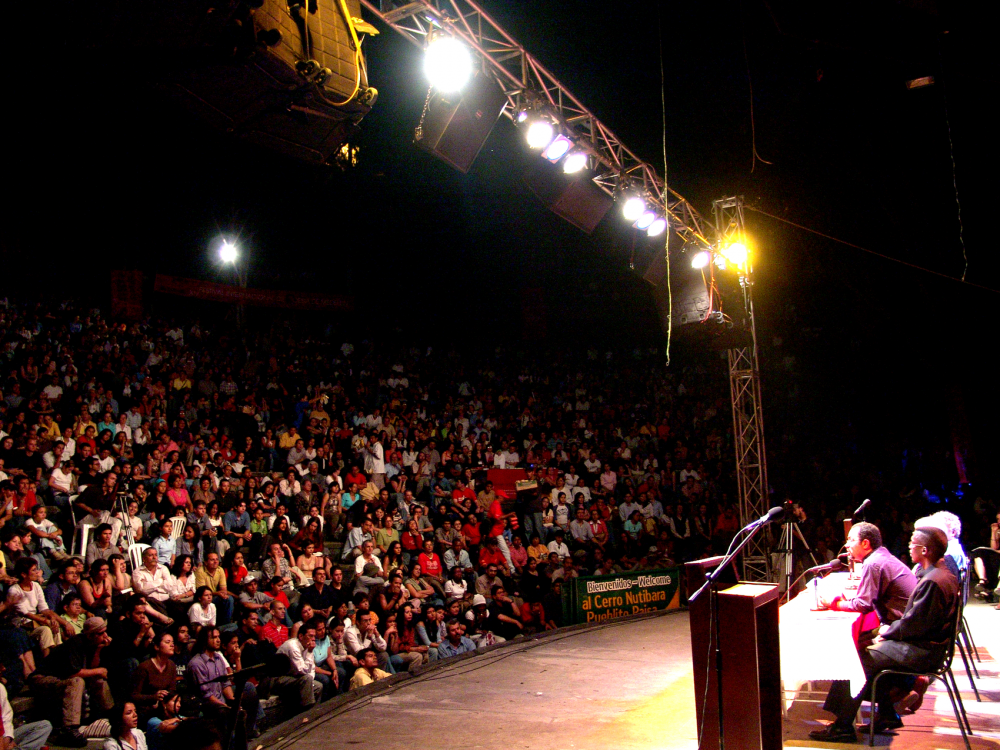 As scheduled, the XIV International Poetry Festival of Medellín is held between June 18 and 26, 2004. The opening and closing readings take place in the Teatro Carlos Viejo of the Cerro Nutibara that exceeds its capacity, as is the case in the venues of the 89 readings that take place in Medellín, Bogotá, Cali and eight cities of Antioquia. In the program of the VIII School of Poetry of Medellín there are seven lectures for a general audience; four workshops; three courses for the city young poets; and12 documentaries, summarizing the history of the Festival and produced in a DV Cam format by the Prometeo Corporation, are shown; and there is also a display of poetry books and reviews.

The first version of the XIV International Poetry Festival of Medellín in Bogotá, with the participation of 28 of the invited poets, has a resounding success, far exceeding expectations, since the audience almost doubles the capacity of the venues chosen.

The International Poetry Festival of Medellín has become a space offering an aesthetic debate with an aim highly characterized by the pressing need of social justice and political renewal in Colombia. It is clear that the listeners in the different venues are selective; they know what they want and what they like, and they chose, they are far from being passive or ignorant. The wide reception by the audience of the voice and poems of the seven Arabian poets that were invited, proves our assertion: On one hand, they are excellent poets whose work in general is not easy, and on the other hand, the audience seems well informed about the situation in that region of the world, specially as regards Iraq and Palestine, whose poets Nidaa Khoury and Abdulhadi Sadoun receive broad and loving tokens of solidarity. There is in it then more than an aesthetic choice, there is also and ethical and political choice from the perspective of art.

We have not sufficiently insisted on the quality of the audience of the International Poetry Festival of Medellín: It is now fourteen years that we have held the event without interruption, and the amount of aesthetic information is now reflected on the high level of perception of the listeners. Moreover it is a process in which we are continually advancing, we will always have new listeners who in their turn will attract new young people. Even though it seems exaggerated, we believe that the Festival has immensely contributed to the formation of a new generation, more tolerant and in a certain way more prepared spiritually and culturally to face the challenges of our present historical reality.

This sole fact (the formation of an audience) shows the necessity to protect and strengthen the International Poetry Festival of Medellín. There are more reasons for this effort. In a city, indeed, that in a certain way was the greatest laboratory of violence of this country (remember the war against drug-trafficking, the struggle for the holding of positions in the neighborhoods of the city between the insurgency and the paramilitaries, the bloody confrontations in the Comuna 13, and the terrible campaigns of social clean-up), but that has been able to create a space for a fraternal reunion centered around beauty, one cannot avoid mentioning the impact that this gathering has on the spiritual state of the city, specially if we take into account the traditional pragmatic spirit of our culture, in an environment that has traditionally been opposed to any activity that does not generate profits.

We must also emphasize in this report a fact that seems irrelevant but that shows how worthy of praise is the Medellín audience: in fourteen years of the Festival there have never been incidents, such as fights, disturbances or violence of any kind, that are so common in massive events. Doesnt this show that the Festival is really a profound act of meeting and communion in the midst of an atmosphere of separation and estrangement?