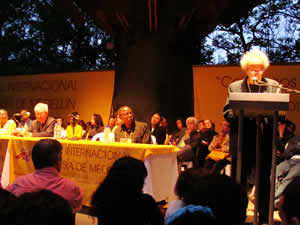 Can one be a political opportunist when far from choosing the party that has the power, one gives oneself to the most repressed tendency of the opposition? This is, however, the accusation formulated by a certain Alvarado Tenorio against Fernando Rendón, oblivious to the fact that in this way his argument is ridiculed.

This Tenorio seems to ignore the fact that the International Poetry Festival of Medellin has the slogan this year: For a peace more active than all wars, which is a strange choice for a director considered suspicious of being harmful to his country.

Must we infer, following this Tenorio guys logic, that the best way to serve Colombia, is to continue supporting partisan divisions? It is true that these divisions are found by Tenorio even in Fernando Rendón and his entourage, who would be autocratic enough as to abusively fire his employees. This issue would be easily verified in a country where democratic security reigns, but all guests of the festival can give personal testimony of the solidarity shown by the welcoming party, just as they can reassure the forementioned Alvarado Tenorio, a poet who calls himself famous, that no envoy of FARC has ever been to their rooms in order to preach the advantages of a desperate existence.

Regarding the accusation made against the guests of the festival of speaking incomprehensible languages and of being agents of terrorism, we leave to Mr. Tenorios inculture the difficult task of proving it.