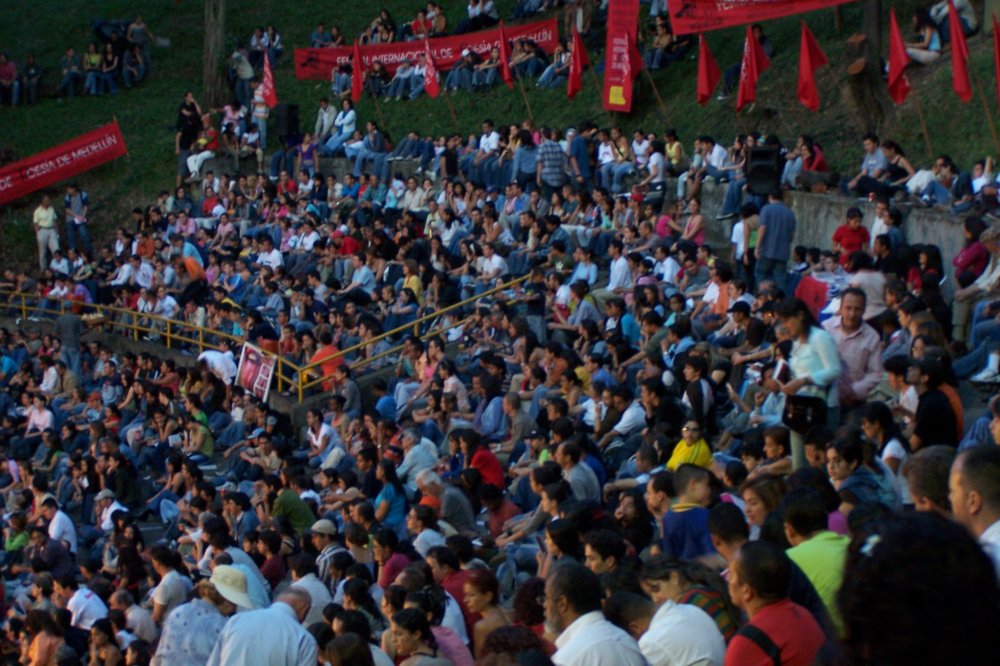 Between June 24 and July 2, was celebrated in nine Colombian cities and with multitudinous assistance, the XVI International Poetry Festival of Medellín, called and organized by the Prometeo poetry review; nearly 70 poets from 40 nations of all continents took part in it.

The successful carrying out of a new Festival, showed once again the persistent and powerful influence of poetry in Colombia, a country torn by more than four decades of war and historically accumulated serious social conflicts with no visible solution.

The Colombian people celebrate poetry in a time darkened by the global dictatorship of the multinational corporations that have deteriorated nature and the lives of millions of human beings. Our youth has again filled the more than 100 venues where the program of the XVI International Poetry Festival of Medellín was held, to express its calling to a full life and its deep yearning for a negotiated political solution for the bloody military confrontation that is daily lived in the Colombian countryside, in order to accomplish peace and social justice, and to make real a comforting country for life.

In the closing ceremony of the Festival, several poets coincided in the assertion that the poetic experience lived by our city has no equal in any other city of the world. We only partially agree with this, because we are convinced that the experience of Medellín can be duplicated in any other place in the world.

For this it would be enough to apply a concept of cultural democracy and to be certain that art is not a privilege of elites blessed exceptionally; and to know that art has a real existence when it can reach all those that give it sense. Any work or art is an act of communication and if this act of communication does not find an interlocutor, it can be affirmed that the work of art does not exist, or that it exists for no one. And what is the purpose of something that exists for no one? Or better said: does something exist that does not exist for others?

One of the things that really makes the International Poetry Festival of Medellín exceptional is precisely this: it gives back to the people what inalienably belongs to them: the right to beauty and truth, that brings closer the day of the poetic justice. Our youth is, without doubt, a luminous youth, and our spiritual reserve and potential to make a habitable and paradigmatic territory of Medellín and the country are in a certain way warranted. But it is a luminous youth because much shadow has been thrown and is still being thrown at it.

The function of art in general and of poetry in particular has not been or is to solve the fundamental problems of men and women. Its function is to remind us, from an ever new perspective, the existence of these problems. And our potential to solve them. Poetry and art are there to widen our conscience, and to spur it on an emancipating direction.

In this sense, we think that the International Poetry Festival of Medellín has fulfilled a vital role in our city and in Colombia no only so that they look at us from outside in another way (although the Festival also accomplishes this), but that we look at the world and at ourselves in a new way. The Festival has also served for the purpose of diminishing our isolation, of making us perceive that we are not alone in the world, and it has reaffirmed us in the certainty that our problems are the problems of all humanity and that our central contribution is to make real a poetic proposal of unforeseen dimensions in Medellín, and therefore to make it real in the world, is based on the premise that without a world poetic revolution the nightmare of the oppressive reality of the contemporary world will not be abolished and substituted by a dream to meet the aspirations of the peoples that have been enslaved and have suffered during countless centuries. It is a dream of repopulating life on earth, a dream of enchaining the social forms of death and of giving full sense to our presence in the world, thus giving back to humanity its natural flotation line in a new time of freedom and splendor.