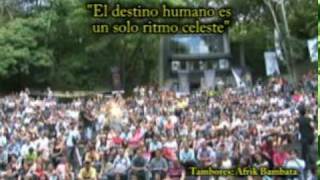 When one does not see a political solution for the bloody war that has ravaged during more than four decades Colombia, the most violent Latin-American country, according to the Human Poverty Index; when poverty and material, spiritual and moral destitution  increase in one of the countries with more biodiversity and natural resources in the world; when  despair and dejection discourage millions of persons who suffer under such a painful historical circumstance; it is then that the sweet dream of a life renewed from the ground up becomes inevitable, unavoidable, like the birth of a new country.

The International Poetry Festival of Medellin, the largest event of its kind in the world, which was awarded the Alternative Nobel Prize in 2006, and recognized as a Cultural Heritage of the Country in 2009, will celebrate its first twenty years between July 8 and  17, 2010.

With the opening of the Festival each year, the spiritual climate of the city is transformed and new forms of contemplating, comprehending and changing our lives spring forth. With its massive assistance, it is a call for fraternity, and poetry empowers those who speak and their listeners. Although the International Poetry Festival of Medellin cannot achieve peace in Colombia, it can help to reconstruct life from language, contributing in this way to peace and reconciliation, by instilling poetry in the heart of all the people without exclusions, through a plural, solidary and profound language, creating new ways of representing the world different from violence, developing imagination and thought in the city and bringing up human beings more sensitive and humane, more receptive and  plural. Poetry is a singing that humanizes the conscience of everyone.

The Festival is organized by the Prometeo poetry review,  founded in  1982, and it is backed by the Municipality of Medellín, the City Council of this city, the Dutch foundations Hivo, Döen and Prince Clause Fonds, the Ministry of Culture of Colombia, the Confiar Benefit Society, the Governorship of Antioquia, the embassies in Colombia of Switzerland and France, the Technical Cooperation German Agency (GTZ), Comfenalco and the Caipirinha foundation, among other institutions.

The International Poetry Festival of Medellin was founded in April of 1991 in opposition to the state of terror resulting from the confluence of tough armed confrontations and crimes committed throughout the country. During its two decades, it has become the most crowded festival of poetry in the world and with the widest geographical representation.

When the human spirit is undermined by the crossfire of death, poetry revives it. Since the dawn of humanity poetry was congregation, a celebration of existence, an initiation in the mysteries and the transmission of knowledge. It was in this way that human beings discovered the power of their spirit, their creative capacity and the transformative power of language. The human essence is embodied in its condition of dialogue and symbolic interchange, which develop a singular conscience and enrichment of life.

Through poetry human beings can conjure the pulse of death and have the vision of a superior world, in which peaceful coexistence is possible. This thought has supported the existence of the International Poetry Festival of Medellin during two decades, becoming an organic part of a society that demands it as a banner of its collective imaginary.

When the Festival opens officially on July 8th of this year at 6:30 p.m. in the open air theater in the Cerro Nutibara, nearly one thousand poets from 158 countries will have come to this event in its first two decades. For the first time poets from Kenya, Guinea, Andorra, Cambodia, Armenia, Slovakia, San Marino, Aruba, Montserrat, and Saint Vincent and the Grenadines.