Regarding the Emblematic Phrase
of the XX International Poetry Festival of Medellín:
Human Destiny is Just a Celestial Rhythm 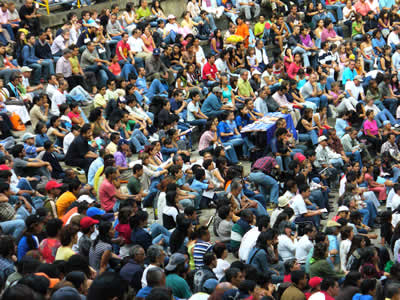 By Jairo Guzmán
For Prometeo

Poetry events are millennial occasions, facing the sun in the center of mystery, facing the celestial inclemency,  woven with the thread of light coming from the sidereal abysses. Poetry seems to touch the enigma that we are, in order to shape the attainments of our dreams, the source of all songs, with the clay of our imagination. In its human dimension, the sense of poetry is the possibility of consecrating our being to song to again feel the celestial rhythm in which we travel, to reveal to us the keys to build a world on a level with our dreams, on a level with our desire as humanity,  as a voyage in the light in which history is seen as an adventure film in the Cinema Earth. In this time of great transnational business, in which a great part of the world population perishes, poetry resists and opens ways. It is sung. Every period, every crisis, has its poetry and its forms of resistance. Poetry has been the motive of human transformation. History is a brief but incisive chapter in our existence, before which poetry overflows its content and epics. A poetics of biology has formed our organism since we were microbes until this present version of our vehicle for life: Our body. Huidobro’s tool of dawn is poetry itself. From the voiceless microbe to the man who talks there was an ocean of battles in which life persists and is revealed to us as a mirror where divinity probes into the void and toward which what existent and non-existent tends. Beyond the nightmare, reverberating in every point of the planet, what is beautiful and sublime resists, and is manifested with the subtlety necessary not to be crushed. The grotesque as an emblem of great capital deforms everything in its jumble of unrestrained production and consumption. Gorged with overexploitation and debris, at the end of the first decade of the twenty-first century, we consider a climatic scandal that surpasses our arrogance as a species and took by storm paradise, being left with an ocean of junk and birds suffocated in lethal clouds. In this geologic crossroads, the Earth harbors the legions of poetry, continuing in their millenary work of the preservation of memory, and which in their wandering from century to century have been building a body, a body that creates and thinks: Because thinking is a form of poeticizing and poeticizing of thinking, in this time which will undoubtedly revive the ancient nuptials of the reason of love that is poetry and the intellective reason of the philosopher. Because it is necessary to think ourselves either the reason of the eye or poetry. We are thus  placed in a space where the sensory assumes the role of a clairvoyance. It would no longer be a century of hands but a century of eyes. A century of seers as Rimbaud wanted. But the silent majorities constitute the blind sphere of statistics, and they centrifugally gravitate on themselves (as Braudillard lucidly presents) and there the foremost role of the eye becomes density, senseless compactness. Hence poetry is manifested from a much more transparent zone, withdrawn from the culture of spectacle and simulacrum. Because the poet has not come to amuse anybody, his mission is not that of the buffoon who walks on tiptoe so the king can dream victories (Gregory Corso). The poet has come for us to reaffirm our celestial condition, to consolidate a luminous self-conscience and to strengthen the power of dreams. The voice that return from the abysses of silence, from the emptiness before writing and its deserts. The voice and the sound that sing in the poem. The written poem goes on being a secret act but the poem read aloud is the property of all the initiated in its singular sound and its multiple senses. We experiment the return of the poem read aloud. We experiment the return of the founding voice.  The congregating voice interprets us and reminds us of our discoursing condition.

This time is more pagan than banal and everything tends inertly to banalize: Now more than ever the compromise of the poet is to preserve poetry (life) from that lying in wait, in order not to fall in its tentacles and the seductions of spectacles, fame or show business.

Poets are subject to many ordeals and cleavages. On the verge of failure in his or her expression, on the verge of the nihilism that promotes isolation, poets are consumed in words that do not cope so silence becomes their true fatherland. The mystic is diluted in silence but  poet condense in silence their spirit to project it on others. Poets expect to be sung, read, listened to. They are poets because their vital exercise assigned them the mission of being those that purify the words of the tribe (Mallarmé). To intone the voice of the tribe is the luxury or poets and their voyage through the world place them in a spiritual summit that allows them to make possible the communicable mission (Rosamel del Valle). On this bridge between Jean Arthur Rimbaud (it is necessary to become a seer) and Rosamel del Valle (I will make the vision communicable) runs the history of modern and contemporary poetry, associated to the evolution of poets and their exercise of bring the lustral fire of poetry. Their effort is great and their condition of messengers of revelations and their visionary animating force situate them in a shifting territory because they bears in themselves great contradictions.  They are split. Their conscience is a zone of conjunction of voices. They are alone but they are peopled. Their poetry would become smoke because what they most yearn for is for their song to acquire life in others. Poets do not write to advance themselves and it is because of this that Hölderlin confirms that poetry is the most innocent of gifts. But this disinterested attitude does not imply their isolation because what they most yearn for is for their song to acquire life in others. If this circle is not closed, the laceration in the implacable jungle of silence is double. Writing in itself and for itself is a poetics. The invention of writing is pure poetry but a certain evolution of writing as a system of slogans and death sentences (in our time phrases are orders, slogans, death sentences as stated by Deleuze and Guattari in Principles of Linguistics) has transformed it into an oppressive and woeful code. The word, winged god, musical air, found golden chains in writing (Angel Rosenblat). Writing in the role of a hypercontrol on a planetary scale is a frightening mess: a semiotic and semantic terrorism of law and its snares, its hermeneutics plugged in a machine of devastation through implacable and absurd laws of great capital, with its infernal arithmetic of out and out usury. In this sense the word becomes the most dangerous of goods (according to Hölderlin). In this scenery it will no longer be necessary to affirm that the word of poets and their personal experience obey the most innocent of all occupations. In this oppressive and alienating context poets have already lost their hölderlinean innocence: their role is different, they are men and women as anyone else and therefore their action bears the stigma of the roughness of the world that radically lost their innocence. This was already completely observed at the time of the poetry and art vanguards, at the beginning of the twentieth century. Poetry is the experience of the spirit before the great existential shocks, before the abandonment of being in the night of the soul (saint John of the Cross); in this way writing is the connatural instrument of poets facing their silence. Silently, the poet restores de purity of the words of the tribe and, loudly, the word returns to it enriched, refined, full of revelations and light. Of these decantation is life made as well as the permanence of poetry. Without the conjunction of the poet and the listener, the poem stays in a potential state, spirit congealed in words, enclosed in signs, miraculous seeds that only germinate in those who make them vibrate aloud. These capsules of poetry will always  be there on the verge of exploiting in sound, sense, liberated music, genius escaping the crypt. This is its magic, its sacred function: To preserve the spirit, the divine life force that survives in what is written. This writing pressed, from which the word turned into voice is extracted, like a jewel of the spirit, assumes a sound, enchanting dimension, through its music, through the verbal alchemy modulated in words. The miracle of the voice defines us, grants us essence, brings to us the echo of our own mystery. There will always be wonder before another’s voice and the charm comes adhered to the voice he or she displays. In the congregation of the voice we are elevated to the sublime heights of our becoming.