Celebration of twenty years of The Poetry Festival of Medellin

Celebration of twenty years of
The Poetry Festival of Medellin 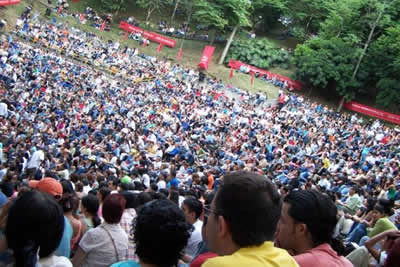 Through poetry one can conjure the drive of death and gain access to the vision of a superior world, in which peaceful coexistence is possible. This thought has supported the existence of the International Poetry Festival of Medellin during two decades, as an organic part of a society that demands it as banner of its imagination.

Each year, when the Festival is held, the city is totally transformed, new forms of seeing, understanding and changing life are created. Poetry gives to the population the tools to confront, listen to and transform it, because it is a drive to life. Poetry is a song that humanizes the conscience of all.