A Country for Life 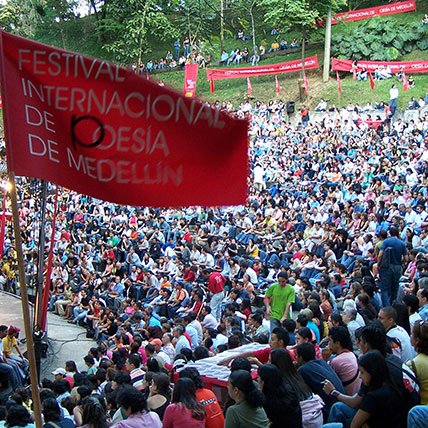 The people withstand a still medieval time of massacres. The wood is devastated without naming it. The menace shows all its teeth. The gardens and the trees are robbed of light. Monstrous systems of espionage control all citizens. The media are torturers and spread the daily procession of death. The slaughter has cut us off from one another and confined us in the labyrinth of distrust. But all of that death has not canceled the remembrance of love.

The present is besieged with ink and fire. The daily law of oppression is opposed to the dialectics of dreams. We remained deaf to winter and summer. We kept silent in order not to say to our children to what green dream we could not renounce.

We retain in our eyes a warm trust in our destiny. Our journey ascends through the centuries and the blood, under the sign of love which is rebellion and never ends, proof that the visions of love will never be food for worms.

Under the waves of stone and from the ages built upon millions of bones and under the air of all battles, we begin our voyage toward the future, to the world not found: to life. To recover the snatched planet.

The pure earth of dew, the ground of stars, the shores bathed by life, will again belong to everyone. For nearly all of us have loved the world. Poetry will be the song purer than the day of a people that destroys its prisons.

The immense clamor of the forces gives us strength. This energy transformed in our new law and the human spirit transforming itself through all the struggles. Love is in the bodies impaired by hunger. We have paid very dearly for the rent of a world that is ours!

The storm looks for the supreme hour. We are not afraid. Let a powerful movement break all the limits. Let each instant be a swell of the dream that arises to increase our thirst, to oppose the adverse reality and brings down death.

An immortal sun greets us with its million leaves. The aroma of the primitive dream returns to the foundation. It waits for the future under the eyelids. It flows toward us the pensive thirst of ancient multitudes, the fraternal awakening of all forces of a singular species.

Among the sands of the wind, we fight amidst a rumor of forefathers. So many have suffered so much that they no longer have a body. But even though they are dead, from their dried-up bones spring will flow out.

We are present in the agitation of the colossal flow of the current. The earth roars, the ocean opens its wings, in the rebellion of the wind. The ardent dream refreshes us and we wave the flag over the line of the horizon. Life sings of a sweet love in the lips.

We fight without the sadness of leaving before time. We essentially want to be a liberated people. We refuse to remain slaves and we brandish the lighting.

My people, you are the future, the cock that sings at the end of the somber night, the deep résumé of the causes: Who built the small and great constructions of history, who sowed all the fields of tomorrow, who recovered from all defeats and will be the great victor at midday?

The ancient revolts seethe in all the continents. Because no fatherland has been ours, we want to be the owners of our own history, of fatherland of all humans, a country of all times, with wings, inebriated and already awakened forever in our own blood.

Listen carefully: the deep changes soon will be here. Do not go on solitary on the road. We shall put an end to all slaughters. Wherever oppression rules, we will talk about destiny. We will keep on dancing on the feast of the night. Greenness will grow without frontiers. The hills will be full of a superhuman victory. The factories and the cultivated fields will be resplendent. A salmon sun will be served on the table. Do not be afraid, the days belong to all. You are not alone in this immense world.

We will have new words for a new justice, we shall join the sun in the revival of the world. We shall return to sing on the grass the choir of dawn.

We shall inhabit the territory where the secret river of a profoundly human dream flows forth. We will have at last the dimension of the earth that created us and the contemplation of its smile will make us wise. A great time will be generously open for all among the dense light.

Brothers of the combative centuries, we will again be a lighted fire against the dark night. Our acts will awaken us. To create will be enough, in the ecstasy of daily joy.

Poetry will be the redistribution of energy. Life has made us responsible for the state of the world, of humanity, and of the earth. How much work we will have!

Our first task will be to know ourselves and to make us the source of the universal language. After so many disasters, the word will survive. The earth will never again be lost. This language will embody de vigor of the intelligence and the senses, and thought will cling to the sensory source and will pull it up, with a bridle.

If we knew how much poetry could decisively raise the will of our time, to achieve the abolition of sufferings and the splendor of the laurels on the front of all workers!

The mornings will belong to all, as well as the sea, the meteor that will not die and never grows old. The unchained stone will again be light. In the great new times, the pulse of the spring and of the farthest star will be ours. Our doors will open to all songs. Suns will scatter over all as on a field of a million ears of wheat.

This and all the worlds will belong to all. It will not be the head of a god, it will be the head of a people that will result triumphant after an agony of centuries. A smile will float from one side to the other of the planet. The hour of the new life will glow brightly. We will be the earth and the universe. The triumph of life over death.