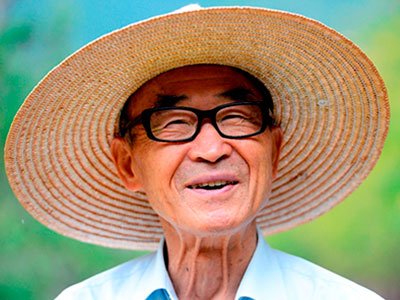 Now is the time for repentance, when the virus of endless desire should be flushed away.

Dear analogue world!
Clamorous digital markets on all sides!
In this social ordeal
now is a poignant time for philosophy in my life.

We now meet the meaning of two,
meet the original meaning of two
that has come back through weathering.
How could such a commonplace thing
be so fresh and new?

Life of my own day after day,
all, save me, are enemies.
Leaping from the hell of myself alone
I meet with this,
so-called humanity,
so-called homo sapiens
so-called we, the mandala of the planet’s life community,

by the panic caused by Coronavirus.

Captured by globalization,
taking wherever I go, here and there in the world,
as the landing place for my life,
as my pseudo-destined territory,
captured by nomadism—
immigration, naturalization, tourism, study abroad, business trips,

now I crawl into the land where my ancestors’ bones are buried,
into the nostalgia of my people,
meeting my own blood and forgotten dialect,
blowing away all anxieties and ostentation,
I greet the first night of my return,

by the extreme situation caused by Coronavirus.

Retreating
in the dead of night with candle extinguished,
I wail at my own life.

How could we be blessed with pleasure alone
by the grace of Venus, the evening star?
We should overcome this breathless critical moment,
by accepting also pain and sorrow.
And so
by the wisdom of Venus, the morning star,
we lock,
we open,
and send today’s coronavirus away.

Farewell,
take with you my wicked civilization’s virus.

It’s a heart throbbing,
tears dripping from the muzzle of a gun.

It’s
a bowl of rice.

It’s
underground roots
not having to worry about the leaves up above.

It’s every kind of life,
each individual life
not subject to other lives.

It’s
a father dying ahead of his son.

It’s
a mother for whom her baby’s crying is all.

It’s
myself being finally abolished

Ko Un (born 1 August 1933) is a South Korean. He had been imprisoned due to his role in the campaign for Korean democracy and was mentioned as one of the front runners for the Nobel Prize in Literature.

He is author of more than 155 volumes, including many volumes of poetry, several works of fiction, autobiography, drama, essays, travel books, and translations from classical Chinese. Many of his works in English translation, he has been translated into more than 10 languages.