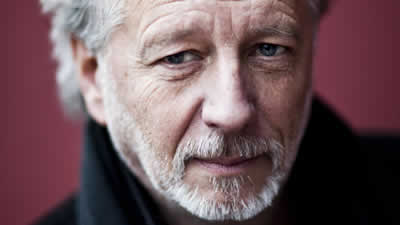 A black sun shines in the night.
We are awake.
The end of dreams
Is near.

What great words can´t say
Will come to you in something greater still.
Take this toad for instance,

Flattened, with stars up above,
The talk of drunken men
In the park near the ring-road.

Let us pass by ourselves,
Lightfooted but unwinged,
Transmitting signs through frozen streets.

Three old bags,
Younger than young,
Hot-blooded and grinning like toads
Near the pool of cold sin
Croaking

And they walk right by.

Stefan Hertmans was born in Belgium in 1951. He is one of the leading poets and writers of the Dutch language today. He is also a novelist, narrator, essayist, playwright, jazz guitarist and university professor on Philosophy of Art.

His book Goya as a Dog, 1999, was acclaimed as a summit of his work and the Dutch and flamenco poetry today. He has obtained, among other awards, the Belgian State Prize. Some of his books published: Cities: Tales on the Road; The Silence of The Tragedy; Tyranny of Time; and Fireworks, She Said.

In his words: "I am convinced that poetry is a medium in which realities are created, because language there acquires a creative rather than descriptive function. By bringing together different things in a precise context, as in the case of a poem, links are established, which did not previously exist. Without arriving at surrealism, they generate new realities that can be fascinating. "