The white woman from Africa 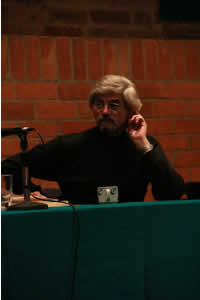 Esteban Moore was born in Argentina in 1952. Poet, translator and journalist. In poetry he has published: La noche en llamas, 1982; Providencia terrenal, 1983; Con Bogey en Casablanca, 1987; Poemas 1982-1987, 1988; Tiempos que van, 1994; Instantáneas de fin de siglo, 1999; Partes Mínimas y otros poemas, 1999. He has translated Charles Bukowsky, Raymond Carver, Lawrence Ferlinghetti, Allen Ginsberg, Gregory Corso, Gary Snyder, Bill Berkson, Anne Waldman, Andrei Codrescu, Seamus Heaney among others, In 1990 he was invited to The Jack Kerouac School of Disembodied Poetics, founded by Allen Ginsberg, where he carried out a translation project. In 1994 he exposed about poetry and translation in the Poetry School of Vienna, Schüle fur Dichtung in Wien. He has participated of various festivals in his country as well as in those of Montevideo (1993), Medellín (1995) and in 1998 he was invited by Amiri Baraka to take part in the homage committee to Allen Ginsberg that carried out an encounter in New York, in which he participated. He collaborates with publications of his country and abroad. His work has been partially translated into English, Italian, German and Portuguese and included in several anthologies. At the present time he prepares an anthology of contemporary Irish poetry.