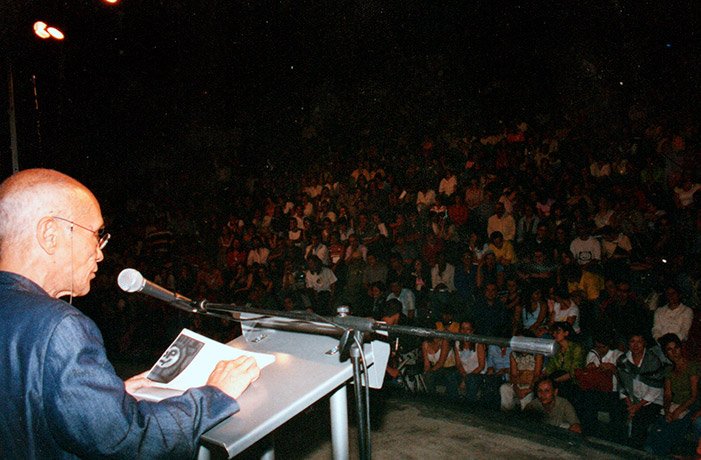 So, coming one day
from somewhere,
suddenly I was standing on the grass;
and because my cellular memory signalled
unfinished business
I have a human shape,
And have even talked about happiness.

Shuntaro Tanikawa was born in Tokyo, in 1931. At age 18 he published his first poems in the daily Literary World and in 1952 his first book: Twenty billion light years of solitude. Besides poetry and texts for children, he writes theater, scripts for cinema, television and radio. He has translated into Japanese the cartoon Peanuts and the text of Mother Goose. In poetry, moving away from the traditional haiku, he has experienced with free verse looking for new metric and rhythms. His work is described as an encounter point between east and west due to his fondness towards Charlie Brown, John Coltrane and Oscar Hammerstein, among other western icons. The critics have connected him with the Beat Generation. His poems have been interpreted in Japan from 1985 for the group Goddess, following a similar style to the jazz. Fruitful and diverse, he has written more than sixty books, some of which have been translated to English, French or Chinese, among other languages. The good known poet in Japan, his poems are memorized by children and girls in primary and secondary schools.