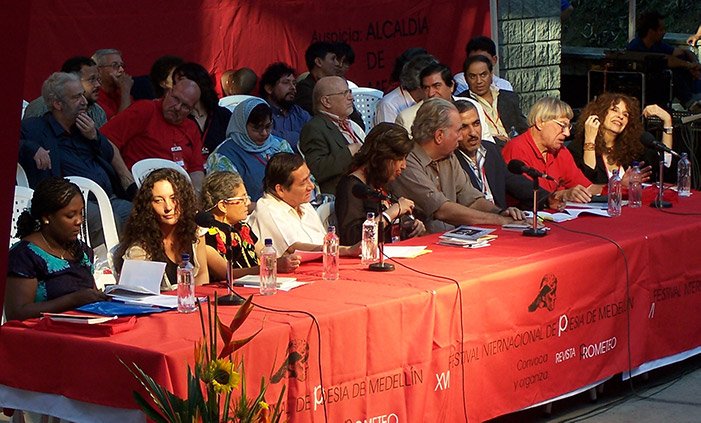 At the table, from left to right, in second place, the poet Guadalupe Grande.
16th Medellin International Poetry Festival

It´s nine o´clock and the kitchen is in penumbra:
I am sitting at a table as immense as a dessert,
before food I do not know how to look at,
And should I ask them, what would they respond?

They are oranges of an out of season harvest,
empireless tangerines,
mourning green chards,
forgotten green lettuce,
headless celery,
green nothing
green after
green afterall.
(Tray of promises
(in the abandonment county)

The afternoon expands in the kitchen
and the sound of the sea does not reach me.
The solitude of the oranges multiplies itself:
there is no question for such opulence,
here in the serenity of this three legged stool,
surrounded by a wall of orphan tangerines,
a legion of spotless bananas,
a parsley forrest thicker than a tropical jungle.

Mute food without perfume:
I look at your and I can only see a caravan of goods,
the dream of drivers,
an urgency for refrigerators
and a trace of dirty water passing throughout the city.

Guadalupe Grande was born in Madrid, Spain, on May 30, 1965, she pass away in the same city on 2 January 2021. Poet, narrator, literary critic and publisher. She was a graduate of Social Anthropology. She published the poetry books: El libro de Lilith, Premio Rafael Alberti, 1995; Renacimiento, 1996 and La llave de niebla, 2003; the book entitled El relato Fábula del murciélago, obtained a mention in The Barcarola Prize in 1996. Her poems appear in several Spanish and Iberoamerican anthologies: Monographic about feminine poetry published by the Zurgai Review (Vizcaya, Julio, 2004), 33 de Radio 3 (Calamar/Rne3, Madrid, 2004) Writing and voice -80 poetic proposals from the Fridays of The Cacharrería- (Comunidad de Madrid/ONCE, Madrid, 2001), Woman of flesh and verse (La esfera literaria, Madrid, 2001), Poetic Village II (Ópera Prima, Madrid, 2000); Dialogue of the Language. Turn the page, poets for the new millenium, Milenio, North and South in Iberoamerican Poetry, The very last poetry, They have the word and From open Spain. "I write the word defeat and I think in the word meaning: in the sense of embracing the last wave, to embrace the embers and the memory that in the center of each word, to the ashes from which the memory burns in the eyes, the oceanic and ashy hole where the words fall through and which I feel as the only possible joint. To see, to look, to talk. I think about words, about their embers, their ashes, their sound, their music of meaning. I think in poetry as words in a shipwreck. I think in each poem as in the last words of this shipwreck, of this necessary defeat: I don´t know if I´m approaching my thinking".