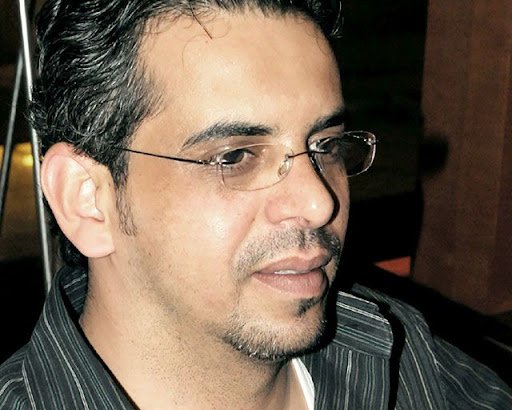 My Homeland...
Would a homeland abolish a loved ones name?
Red tape all his civil documents
Or cross-out with red ink the names of its people
I hunger for the homeland that exiled me
To beg for a land
A name
A face that has no resemblance to the roots that created us.

My homeland...
I crave you a river that cultivates the heart
I desire you a heart despite the distance
I long for you to be my address.

Which of us preserves the secret
Soul´s lilac, retrieving the doves of memory.

Would a homeland´s dagger be in its lover´s waist?
When he admits the seagull´s sadness exhausts him
He groans, no water and no resistance.

My homeland...
Are you a homeland?
Or an undertaking oil well in the desert
That fills the foreigners´ pails!

Mohammed J. Al-Nabhan was born in Sulaibkhat, Kuwait in April 10, 1971. After highschool, he worked as a calligrapher and graphic artist from 1989 to 1995 when he migrated to Canada and made advanced studies of Graphic Design and web pages. In 2000, he founded along with Karim Al-Hazzaa and his brother Saleh Al-Nabhan an electronic magazine which he considers as the bridge that crosses the silences of history and reality. He is the editor of the magazine Ofouq since that same year. In 2005, he founded along with Arab, American and Canadian writers the Cultural Foundation Jozoor a cultural independent non-profit organization interested in the Arab literature of the exile. His poems have been translated into Spanish and English. His name appears in several anthologies and he has translated many poets included in anthologies, from English into Arab. He has also published his poems and articles in different Arab literary reviews and newspapers. He published two poetry books: Another Exile (Al-Mada House, Damasco 2004) and My Blood Is a Stone in Your Still Door (Fundación Cultural Jozoor, 2005). Any exile poetry talks about pain. And it´s not different in Mohammed Al-Nabhan´s poetry. His verses are a portrait of the pain of the one who left his land and is confronted with an alienated reality away from his roots. For the exiled, poetry becomes his homeland and the poem his territory. In that metaphysical home, the poet constructs again his home, this time with words. Only in the poem, he can feel the liberty of crying out to heaven with full autonomy. As long as poetry exists, the human being will not feel totally alone, although pain never disappears. Every exile points out to a sensation of death, of living death, so we can see in his poem Winter. Me levanto cada mañana/En Enero/Cuento mis costillas/Costilla/Por costilla/Hasta la caída de la oscuridad/Duermo y sueño con el sol del verano. The sensation of strangeness to the fact of being alive, when the poet counts his ribs each morning shows clearly the absurdity of exile and its intimate relation with death. The poet is confronted face to face with a day-to-day petite mort and to wake up each morning with the surprise of not being in his homeland.