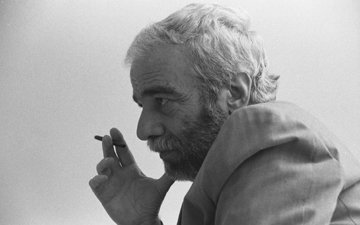 At sunset
one by one they counted carcasses
and then-like every year-
both generals
dismounted from their gilded steeds
for a friendly handshake.
Dead heat.

Spiros Vergos was born in Athens, Greece, in 1945, died in Prague in 2007. Poet, narrator, diplomat and journalist. He exiled himself during the Greece dictatorship from 1967 and 1974. Progressive militant, in the restoring of democracy in his country, he participated actively in this process through his work as a journalist. He has published the poetry books: Abnonimíes; Martiría thanatu and riyes sto jrono, Piímata (Roots of a Time, 1970-1995). The Greek thing: sun impregnated death, he writes: In this verse, a fundamental dichotomy in his poetyic work resounds. By one side, the Hellenic sun which transcends human time and which illuminates, even in its agonic glitter, the infinite heaven of mythologies. This inheritance, this wise light remains in the language: in "the chant of a language which has its roots in my blood" By the other side, there is mortality, attached to history, in the inexorable time of crime and affliction that distribute the despotic powers. In addition, there is the guilt of those that not only were not capable of avoiding it but also perhaps encouraged it with their negligence. Therefore, history is lived as treason to time, as if that solar mythology was degradated to death. Myth then appears in a ghostly manner when confused with history´s profane time, as if its signs were specters emptied of substance and still then reverberate in the poem. "Helen/ sleepy in the voluptuous couches of Troy/winter in the cafes/full of old ladies/ stained with earings and syllogisms". This dichotomy between myth and history is still away of presenting itself in an abstract way in his poetry: it is refered as a lyric confession, in bitter metaphors and merciless ironies that hardly disguise that ancient splendor that still remains in the memory of language: For that the poem is generally taken as a vendetta with the past, as an elegy in the present, as a future fear. Three key words give not just the title to three of Spiro´s poems but also resume three basic feelings of his implicit ars poetica: "guilt", "fear", "hope". Just fear and hope remain for the poet-witness when he enumerates the days of his time. But also hope. In a world where the notion of polis and utopia have been exiled furiously, in a world where the luminous myth remains under the shadows, the fragile and stubborn hope remains, even without faith, in the act itself of poeticizing. "The god abandons dreams/ courage you in the salvation of man/ hope can inhabit in our desperation".