Maybe sharing
the name of a rebel
helped him
to conceive a dream.

can move the world. 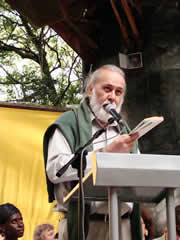 JUAN ANTILLÓN was born in San José of Costa Rica in 1940. The safest and most direct source to get information about Juan Antillón’s poetry is his own essay “Sobre la Poesía” (About Poetry), which is included in his book “Rosa de Papel” (Paper Rose): “One can justify the existence of communication difficulties in a message of great complexity and high level of abstraction, but it cannot be justified in entangled words utterly devoid of logical coherence” (...) “the poet discovers hidden shades of reality, but he does not invent that reality” (...) “because the use of absurd concepts only diminishes poetic thought" (...) “When there’s an excessive use of ornaments, of rhetoric, both in the substance and formality of a poem the result tends to be equally deplorable." (...) “Consequently, if my poetry is formally simple is because I intentionally made it so, it is a simplicity that was accomplished by refining the sentences a lot until I obtained what I wanted; which is the clarity of the word, not the simplification of the content. “Another thing which I have abided by (…) is the search of beauty in my sentences, their musicality, rhythm and harmony” (...) "And by this I don’t mean metric and consonant rhyme, which can of course aid or facilitate the attainment of that harmony; if one does without such crutches and makes free verses, one is not renouncing the harmonic imperative, but looking for it in a higher level of expression (...) It must also be considered that you are working in a physical plain, that is, a sheet of paper, a colorless space where graphical signs will be scattered forming a drawing (...) that space must be used like one more way of expression, as well as the distribution of the words in that space (...) my usage of broken verse (...) as a rhythm resource, a way of substituting punctuation or a parallel expressive resource. But behind it is also the importance I give to each word-symbol (...) Optically, the division of the verse allows the conscious eye of the reader to obtain a complete perception of the thing, giving each symbol its specific weight, which is something that does not usually happen when reading long verses; in this cases the reader is left with an mere impression, a global final emotion, but what interests me is the construction process that compromises the reader’s conscience (...) In the end, there certainly it that global emotion, but there have been many things more on the way. (…) A poem is then constructed with exquisite precision, starting from what we so vehemently wish to communicate and ending in the obtainment of such communication.  If someone thinks that kills poetic emotion by taking from it a certain spontaneity, it is because he has not stopped to think what intense childbirth every note in Beethoven’s Ninth Symphony had. (...) Emotion, that I know of, has never been at war with intelligence ".