It is I who was engraved under the weigth of the seers,
who just knows the gradients and the distances,
the kingdom of the syllable, its white paper poison,
the folly of power, its uproar,
the nakedness of the fallen angel, the immensity of the stone,
the pretext of hell, the threshold of the servile.
Not even my greedy clock sees the darkness of so much delirium,
nor the abyss of the flesh or the scar I bring along.
Since my beginning there are less trees and more scaffolds,
dark bushes and miserable mud tables, slates and
wood torn off, fallen walls, a broken and changeable garden,
razed adobe walls and berms, cut-up sails in three pieces,
paths of dryness, thistles, veins of mourning hawthorn,
mute flowers, stones that bite the blood of tedium
and an unusual sown land of birds spreading over
the holy land of paths.
The beggars walk over the erosion shouldering a bag,
the old men of the tree-lined path step on rugged branches,
the suspended stars, the heavy ax, the ashes.
I am fixed on the stone, the debris, the affliction,
I know the exact place of the corrosion of a sky already defeated. 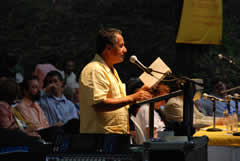 JULIO CÉSAR ARCINIEGAS was born in Rovira, Tolima, Colombia, on June 6th, 1951. His published work includes works as The Invented City; Color of Fear; There’s Numbers Over the Temples. He Won the Porfirio Barba Jacob national poetry award for Abbreviation of the Tree. In Gabriel Arturo Castro’s essay “A Poet’s Labyrinth is a Battlefield”, talking about the book ““There’s Numbers Over the Temples” he says “... His writing is pronounced from tension, interiorized reading and movable imagination. His word is not direct, perhaps because the author is convinced that the poetic language distinguishes itself from the daily one by the perceivability of its construction, by the interest and desire to mold an artistic object... It does not matter that the writer is incapable of solving the riddle in the end, the intricate thing, for he stands raising his question to the readers, his virtual surprise that will take them to an inquisitive attitude, to the production of secrets and thoughts. In spite of the very hermetic and too contained images, the writer’s initial worries, either Metaphysical or religious, have been literaturized with the intention of creating a poetic object. His budding roots are of intellectual type, arisen not from the exclusivity of the most intimate and personal dive. The restlessness he expresses is a consequence of the frequent reading of diverse texts that is recreated and assimilated from a calm state. Poetry in his work is a possible rupture from unalterable daily reality, which, therefore, allows the intrusion mystery in real life. The poet finds himself before the inexplicable, facing the presence of unusual worlds and powers...”