Nothing moved there
only us
inside
howlings and knocks
people crawling
and biting while they cry
Under the house
in anguish      (of the strict heap
There is snow on the statue and the creeper
Spiders          (knowingly inhabited
in the ears of our Father
who art on the rock
on the edge
on our sickle of each hour
And in spite of wanting to go
one stays
there
where nothing moved       there
during years
subjects of anguish
Impossible things:
Manes of algae
Princes of defeat
Orifices 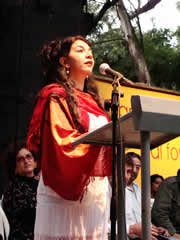 LIBESLAY BERMÚDEZ was born in Bogotá, Colombia, in 1963. Author of Apocalipsis de la rosa, 1988; the novel Ritual de títeres, 1990; El Tempestario y otros relatos, 1998; La palabra liberada, 2001 and the anthology Liberación del origen, 2003 and Oscuro Nacimiento, 2005. Founder of the cultural magazine Común Presencia 1989. Maurice Blanchot International Essay Award for La pregunta del origen. Creator and coordinator of the international collection of Literature Los Conjurados, distributed in five countries. "Ritual de Títeres (Ritual of puppets) is a fight between philosophy and image that leads luckily to tragedy" (E.M. Cioran). “Apocalipsis de la Rosa is, in my opinion, a valuable example of what poetry should be… I am specially attracted to his sense of fundamental contrasts, his pact with surprise, his containment of language, his natural boldness to cross limits, the projection of silence that there is in his words, the search for sight and illumination instead of devices or maneuvers that only dazzle the unwary". (Roberto  Juarroz). This voice never subdues itself to the meaning of existence, be it metaphysical or social, because it´s shout has an elemental and uncertain strength, vibrant with blood, that turns into a liberating word, poetry. (Antonio Ramos Rosa).