The Southern Cross comes to our appointment
every night, without fail.

Where are you? What orbit do you navigate
so that they haven't seen you anywhere?
What is your route? Your speed
is measured in light-years; or was that before?

I've spent so much time
practicing the habit of waiting for you.
Meanwhile, the Southern Cross
pretends to accompany me.
(Who knows where
it's fulfilling its tireless mission!)

Each time I see it
I feel here, in the torrent of my blood,
an irremediable
void. 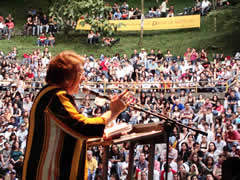 GLADYS CARMAGNOLA was born in Guarambaré, Paraguay, in 1939. Children´s books Ojitos negros, poemas de amor dedicados a un niño, 1995; Navidad, 1966; Piolín, 1979; Lunas de harina (Relatos de Cualquierparte), 1999; Paseo al zoológico, 2003. For adults she published poetry books: Lazo esencial, 1982; A la intemperie, 1984; Igual que en las capueras, 1989;  Depositaria infiel, 1992; Un sorbo de agua fresca, 1995; Territorio esmeralda, 1997; Un verdadero hogar (1960-67), 1998; Banderas y señales, 1999; Río Blanco y antiguo, 2002; Una rosa de hierro, 2005; Poema de la celebración, 2005. Co-founder of the Society of Writers of Paraguay and Associated Paraguayan Female Writers, member of the PEN Club and other cultural associations. Some of her awards incluye: Jose Maria Heredia Award from the Association of Art Critics and Commentators of Miami, USA, 1985;  Fiambrera de Plata from the Ateneo of Popular Culture Córdoba, España, 1989; Unique Poetry prize from the German Paraguayan Cultural Institute, 1992;  Honorable Mention from the Nacional Literature Awards, 1995;  Poetry Readers Award 1995; Municipal prize of Literature, 1996; among others. Various Acknowledgements: from the Municipalities of Asunción, Luque, Guarambaré, Ypacaraí; and the Nacional Museum of Fine Arts,  2004, The Lion club, and many other institutions of all levels.  Hugo Rodríguez-Alcala, National Literature Award, professor, intellectual and critic of excellent merits, has said of her:  “This is a poet that has the tricks of the trade and uses them, that knows how to write verses, that has something unique to say and says it in her own voice. She has also been named “Ambassador of wind and rain”.”