The circus was announced and all went,
They knew the trapeze artist was coming,
the magician with his beautiful helper,
the tamer of tigers, the playful monkeys
and the clowns
What they didn't know was that several presidents and other
politicians would attend as part of the show. 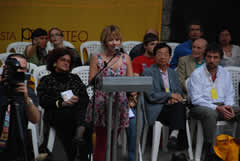 DIANAMAR CARVAJAL was born in Medellín on March 5th, 1983. She is a Student of the B.A. in Literature and Spanish Language program of the University of Antioquia. She has participated in the poetry worrkshops organized by the Piloto Public Library and the Prometheus Art and Poetry Corporation. She has several unpublished poetry works such as “Unipoefa” (1999); “Celda de Soñadores” (Dreamer’s Cell, 2004), “Llanto Hipógeo” (Hipogean Cry, 2006) and “Culpa de Otra” (Another One’s Fault, 2008). In his essay “Dianamar, del Existencialismo a la Realidad” (Dianamer, From Existencialism to Reality), Diego Fernando García Restrepo says "Her poetry is the demonstration of the poets character trying to clarify her artistic creation to make it unique, to caress her own words, to see them grow and to bloom, her work is based on reality, lived through her experience or through the eyes of the other people's experiences, her reality is the reality of others and she reflects this in her poems dreamily and wisely; this is why through her words human histories are constructed, her poems have a sad air, open to melancholy but not falling in dismal thoughts, on the contrary her poems are her sons, the heartrendering childbirth that cries out to injustice, to the echoes of death that surrounds her paraphrase, to read her is to read the country, is to find the point where fascism and democracy confuse themselves, is to get fully involved with the mega social tendencies. Her work can be approached from the different personalities that it possesses and that are expressed plainly in it, the social Diana, the romantic Diana, the mother Diana, the ever in love Diana, the confused Diana, the Another One’s Fault Diana and the Hipogean Cry Diana, they all murmur different word build a personal diary at the edge of sanity, to which we can all relate, she writes fluently and neatly attaching the norm with the edges of metaphor, simile and satire, among others. Her poems come forth from her existentialism, and demonstrate her commitment to the human cause, "nature awaits patiently for the extinction of man...", nonetheless she gives a feeling of becoming one with the landscape, of being a creature of the woods, of being an everyday element, incapable of attacking, “I want to be tree or flower, I want to be rainwater, I want to be a mountain home, and to calmly be quiet like a god”, a new being who inspires the peace that supposedly exists but has never seen for herself, and this is why she denounces injustice. Reading Dianamar’s work generates patriotic enthusiasm, the awakening from amnesias induced by the powerful ones, sensitivity for loving feeling, whether heartrendering or pleasurable one, the reconciliation with our own life, a life that must serve us to construct ourselves among and with others”.