After a useless night in sanguineous transit
-the shivering skin-
-the minimal moan-
I celebrate the candid ritual of biting envelopes open
From an intense atmosphere,
Letters that speak of faraway countries
I'm seduced, I'm beaten.
-¡Return my son!-
my mother signs.
In a fit of passion
I resume drinking the medicating infusions
the garlic diet
the abstinence
but it is futile;
both my fangs bite down
once and again my destiny:
watching strangers-dreams is my doom. 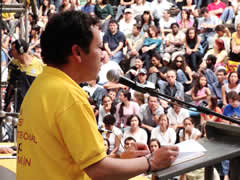 BENJAMÍN CHÁVEZ was born in Bolivia February 17, 1971. Studied philosophy at the Universidad Mayor de San Andrés de La Paz, and Anthropology at the Universidad Católica de Cochabamba. He has published the following poetry books: Prehistorias del androide, 1994; Con la misma tijera, 1999; Santo sin devoción, 2000; Y allá en lo alto un pedazo de cielo, 2003; Extramuros, 2004; Pequeña librería de viejo, 2007, National Poetry Prize. Editor of the literary magazine La Mariposa Mundial and the literary supplement El Duende. He has also produced short stories and his literary work is contained in various anthologies. He collaborates with newspapers and magazines from his country and abroad. He lives in La Paz.  Roberto Echavarren refers to Pequeña Librería de viejo, saying: “The poems of Benjamín Chávez are more a substraction than an addition. They highlight a deconstructive process that leaves few things (or at least few you can see) standing, but inserts us in a space that they segregate, a field of the most radical dispossession. “Lanuguage peels itself” Its minor tone is its greatest success. It opens a habitable space, where the echo reverberates in silent meditation “the weak music of soft things” (probably his deepest or best poem). In lonely retreat those humble companies let you hear their dull outcry, but it must be very silent to hear them. All the opposite of a show of shining images or rhetorical declarations, the voice of Chávez is thin but authentic and it gives us the secret of a tempered ear.