Where the flower shows her beauty,
Desire disengages itself from later,
Names are suspended in two bunches of eight,
A nail scratches the horizon into skin.

Where the flower shows her beauty
Fingers cross over into here and here and here,
Hands grasp at veils made of hair,
Infinite breaths give colour to infinity.

Where the flower shows her beauty
The consonant inspires the vowel.

Where the flower shows her beauty
Butterflies take the salt from the sea.

Where the flower shows her beauty
Time enamels tattoos on petals. 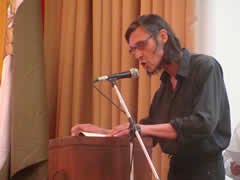 ARJEN DUINKER was born in Delft in 1956 and studied psychology and philosophy. He has had a novel and eight volumes of poetry published in The Netherlands, all by Meulenhoff Publishers. One of his poems was translated into 220 different languages for a project entitled 'World Poem'. He works, together with glassblower Bernard Heesen and graphic designer Désirée Achterkamp, on the many parts of the encyclopaedic dictionary The World of the Glassblower. He also collaborates with the Chinese poet Yang Lian.  On the appearance of Rode oever, Arjen Duinker's first volume of poetry, it was immediately obvious that a poet had emerged who did not, or did not want to fit into the mould of a Dutch poet. The volume included poems which seemed to be little more than one-dimensional descriptions of reality. Something Duinker did with such poise that the inevitable postmodernist question seemed completely superfluous. Which reality? Just reality. From the very beginning, Duinker's poetry has always been about the reality of flowers, stones, mountains, rain, wind, ivy, rivers, the reality of things as separate self-contained entities. That is: all these things as they exist without the interposition of human, all-too-human thought, without the interposition of the abstractions that rear their heads as soon as a human opens his mouth. In his second volume, Losse gedichten, we read: 'If you give me abstractions, / I'll give you a fan of wood and: Nothing is more foreign to me than belief, / Nothing is more foreign to me than emotional connection / through thought. What he wants is that: of things / the very things become visible.'  In his collections to date he has consistently tried to shed his own personality, essence and baggage in order to smuggle into his poems the things he experiences without thinking: the effortlessness, the self-evidence of things like flowers and stones. In every poem it's as if the poet is, to quote from 'Het uur van de droom', 'body-searched by uninterpreted nonhuman reality'. Things go through his pockets, his clothes, his head, his whole personality for that human, all-too-human quality that ensures that people always perceive themselves facing reality. In his latest collection the square in the long poem The Hours '(...) Lets me linger in the shadow / of every possibility. / Comes over to me / And searches me / Recoils / And starts to laugh.' The laughter of reality itself is often heard in his poetry. This laughter ensures that the stone that cannot blossom blossoms, that the permanent abstraction of language becomes wooden fans in Duinker's hands, and that readers immediately hear reality itself speaking in a line like: 'I'm silent about reality'. The poet calls out: 'Come, things that stay and laugh, notice me!' This request, this longing to be a part of an undivided reality, a reality experienced not with the mind but with all the senses, leads to poetry that comes in search of the reader's own all-too-human qualities. The poems come right up to the reader, go through his pockets, check the seams and hems of his personality, his essence, his baggage, amiably but determinedly shaking him down.