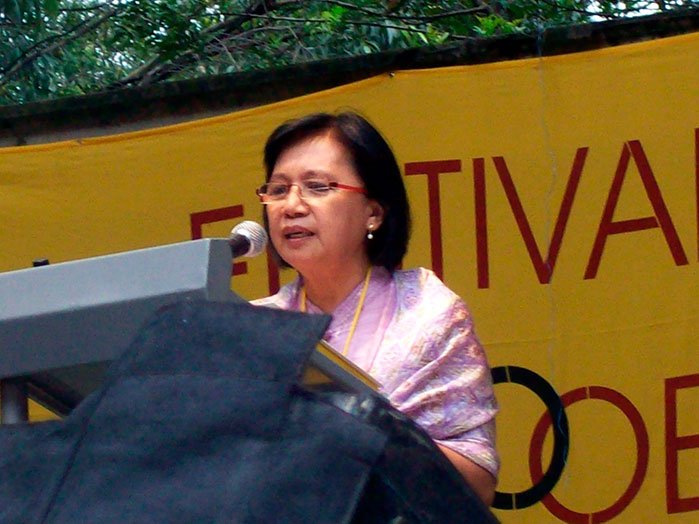 This word unfolds, gathers up wind
To speed the crane´s flight
North of my sun to you.

I am shaping this poem
Out of paper, folding
Distances between our seasons.

This poem is a crane.
When its wings unfold,
The paper will be pure and empty. 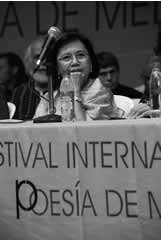 MARJORIE EVASCO Philippines, 1953. Born in Tagbilaran City on the island of Bohol in the Visayas, the central part of the Philippines, Marjorie Evasco writes poetry in two languages, English and Cebuano-Visayan. Her two books of poems, Dreamweavers: Selected Poems 1976-1986 (1986) and Ochre Tones: Poems in English and Cebuano (1999) both won the National Book Award for Poetry from the Manila Critics’ Circle. Two other books, one she co-authored with Edna Manlapaz called Six Women Poets: Inter/Views (1996), and another called A Life Shaped by Music: Andrea Veneracion and the Philippine Madrigal Singers, also won National Book Awards for Oral History and Biography respectively. In 2006 her book Ani: The Life and Art of Hermogena Borja Lungay was published and won the A. Ongpin National Book Award on Art from the Manila Critics Circle. She finished her Ph.D. in Literature at De La Salle University of Manila, Philippines where she is a full professor of the faculty of the Department of Literature. My first book of poems called “Dreamweavers” is a book of origins. It took form in 1987 after ten years of work and its themes touch upon the creative concept of the “Mata” or “Eye” motif found in traditional Asian handwoven fabrics. In the Cordilleras, north of the Philippines, the eye motif also conveys the concept of keys, locks, openings, closures. In an associative leap of the imagination, these concepts relate to the sense of an integrating Self. // Another creative concept that informs the first collection comes from Phillipine history. At the point of colonial impact, the Spanish chroniclers described the Visayans pintados/pintadas-- the tattooed people. Markings on the body were only for men and women who had done deeds of valor or created beautiful things useful to the life of the community.  // The second book called “Ochre Tones” took longer to complete -- 12 years, and I call it a book of changes anchored upon the primary elements of earth, water, fire and air. It is in this book where I undertook to reclaim my mother tongue through translation from English to Cebuano-Visayan. Needless to say, the decision to write in Cebuano and become a bilingual writer is a political and artistic choice in the context of postcolonial acts of language. /I know only this: that the materials of the imagination are taken from the haphazard paddies of dreams and memories, and that each poem feeds on whatever it needs. The rich loam of time and space, lived outside and inside the self nurture the-creative process. And the poem’s making is a way of focusing this inner sight, to let something new come alive with sound, movement, taste, texture and shape, bringing us back to things as they were when we named them for the first time. // I believe that once a poem is written, the poet can become invisible again until the next urging to sing the rattlesnake, grasshopper, centipede, cow dung or buddha. For the making of a poem is an eccentric act of faith that both the conjured up thing and the living presence of the world will someday awaken in another person’s body of memories and dreams.