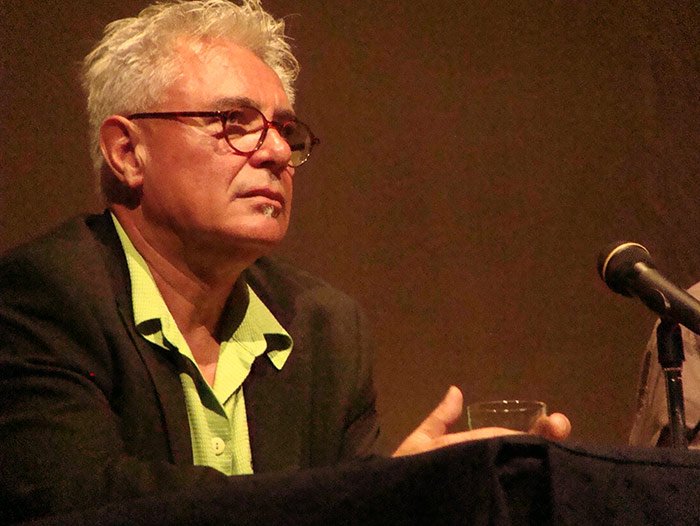 Of you I posses
ten volumes of your voice
the jubilee edition of your body
the so-called Leipzig edition of 1998
a few exquisite bindings
of your skin
with barbed bracelet circling the spine
beyond that, prolific meaningful glances
and a personal drama
thats been playing for years
Moreover I own
annotations, reviews and hermeneutics
on laugther, tears and excesses
en masse
Finally still a couple of poems
that, after having exploded in my heart
showered down on our small disorderly home
like the ashes of Gomorrah
so that finally
after years of agony
to end in the dust bin 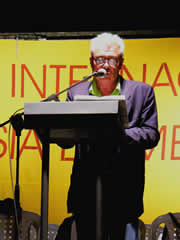 GERHARD FALKNER was born in 1951, in Germany. Poet, playwright, essayist and translator. The publication of his first volume of poetry, so beginnen am körper die tage (so begin the days along your body) received enormous critical acclaim, comparable only to the echo to Grünbeins appearance ten years later. The volume was followed by der atem unter der erde (the breath beneath the ground) 1984 and wemut in 1989. A grant awarded by the ‘Literarisches Colloqium’ led to the publication of Berlin -Eisenherzbriefe (Berlin - Iron Heart Letters) in 1986, considered to be an important postmodern text. In the early 90’s he spent one year travelling through the United States and Mexico, which brought forth his collection of American poets Am lit. Using essential images, in so beginnen am körper die tage Gerhard Falkner left behind the poetic common sense of the early 80´s that rejected anything but formal experiments and ‘everyday poetry’. He combined formal discipline with a opulent and direct sense of the present, thus preparing the ground, as one of the first of his generation, for a poetry alive with richness and sensuality as well as melancholy and pain, as it then began to gain acceptance from the middle of the 80’s. Falkner’s poems also dealt with the estrangement of the poet, the disappearance of the writer in the background noise of his text and of history. This experience motivated his decision to silence himself, as he announced in 1989 his volume wemut to be his last poetic work. After publishing in 1995 a selection of earlier, but also several new poems, titled X-te Person Einzahl (Nth-Person Singular), he broke his resolution. // Nevertheless the disappearance remains a topic in Falkner’s new work, as for example in the poem ‘Kopfmusik’ (Headmusic), where it reads: “unsere Gedichte werden vergessen / werden, - bleiben wird allein / das Kopfweh / derer, die sie nicht behalten haben.” (forgotten will our poems / be, - stay will solely / the headache / of those who did not keep them.) One of the most potent poetic voices of his generation, captivating with its powerful imagery as well as its formal structure, this voice will certainly not be forgotten.