WAITING FOR A TRAIN

At first we used to receive news of its passage
through cities and towns with enigmatic names
but today there is only the habit of spying
the long-lost idea that our lives have reduced themselves
to waiting for a train which will take us
towards known destinations
where tired women, taciturn men,
and children with eyes diminished by sleep
are waiting for a train to go to another station
where others are waiting to travel
with faces and gestures identical to ours 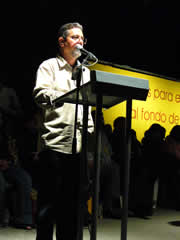 ALEX FLEITES was born in Caracas, Venezuela, in 1954. Cuban citizen. Bachelor in Philology at the University of La Habana. Poet, scriptwriter, dramatist, narrator, publisher, translator and journalist. He has been chief of important cultural magazines such as: El Caimán Barbudo, Cine Cubano, Unión y Arte Cubano. He has received numerous acknowledgements, including the National Poetry Award “Julián del Casal” and the National Award for Journalism "26 de julio”. Author of a dozen books, amongst his poetry books we find: A dos espacios, 1981; De vital importancia, 1989; Ómnibus de noche, 1995; Un perro en la casa del amor, 2004 and La violenta ternura, 2007, that gathers the most outstanding pieces of thirty years of poetic work. He has translated from portuguese poems of Vinicius de Moraes, Cecilia Meireles, Carlos Drumond de Andrade and Manuel Bandeira, with which he created the anthology Balada feroz, 1991. In his essay, Simply the radiant poetry, Gustavo Pereira tells us: “Alex Fleites has scrutinized, touched, tasted, erected, besieged, diluted the fruit of living and has discovered in it, as it happens to all mortal, ambivalent flavors, different dualities, bitter or sweet frustrations, fleeting joys and misfortunes or obstinate uncertainties and certainties. But, as they are processed by his sensitive conscience - that which many call spirit- become part of a greater mystery named by us simply radiant poetry.