THE HOUR OF THE BIRDS

Ungraspable and seamstress
the word
covers with a deceptive fabric
the wound of the night:
plays at liberty
or dreams of fortune.
Like the eternal Penelope
weaving everyone's tunic
untacking the secret of the wait
until she invents a new face
or a mirror without name.

Ungraspable and seamstress
hears the wind pass
wearied by the birds. 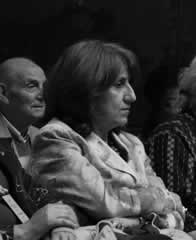 LUZ MARY GIRALDO was born in Ibagué, Colombia.  Essayist, poet and university professor. With musical studies in piano and singing, she has dedicated her past years to the study of Latin American contemporary narrative and poetry, with emphasis in Colombia, on which she has several publications. She  has participated in national and international congresses, seminaries and symposiums and has been invited to universities in Colombia, the United States, Spain and Italy. With several essay books, she has obtained national and international distinctions with the Ministry of Culture, the Distrital Culture Institute and the Andrés Bello Accord. As a poet she has been invited to Barcelona, Florence, Seattle, New York, Mexico, Venezuela and Hay Festival-Cartagena. She is the author of: El tiempo se volvió poema, Con la vida, Postal de viaje y Hoja por hoja. And co-author with Óscar Torres and Martha Canfield, of two books of poetry respectively translated to English and Italian. Her poems have also been translated to French and have been included in various anthologies in Colombia and abroad. She has directed workshops of literary creation and is presently a teacher in the Masters degree of Creative Writing at the Universidad Nacional de Colombia. In an essay about the author, Franca Bacchiega states: “To tend towards harmony as a constant and primary search seems to be the conducting thread that ties all of Luz Mary Giraldo´s poetry together and gives it a very precise color where bliss and frustration, light and shadows, vitality and listlessness direct us towards a substantial search of pairing up opposites and an order in which they may be gathered, but, at the same time, the search for a nucleus to hold them, that may let them manifest themselves and fold themselves once again when their movement is done. This process, in which the author participates being implied in that which she observes and feels, becomes poetry.”