Your death began a month ago
and from the very first day
children have played in the parks as usual
and your room has been rented
to a great big boisterous worker
and everything seems the same in the streets
although your face grows ever paler in my memory.

When darkness surrounds me at night
I concentrate in anguish on trying to revive you
reconstructing your face closing my eyes and clenching my fists
but you just float at the end of a moonlight garden
and it's all in vain for you don't say a word
and your image trembles and is erased
like the landscapes reflected in still water
that are shattered at our touch.

People work
converse
pass me by
and their eyes slip over me indifferently.
I think they are cruel
but then I remember that they didn't know you
and don't know that I'm the bearer of the awful news
and even if they had known you and loved you
could they possibly do anything else but their lives?

Our world begins to be young
our world only loves
the dead who have given it more life.

That is why you will not escape oblivion
why it is so difficult to retain you
why it is so easy
to fill the void you have left.
Your life was innocent
and your death does not shake us.
It is but a smile that vanishes with the fog
a melodious echo that is lost down dark corridors
where we can no longer follow it. 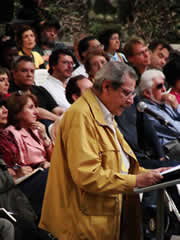 EDUARDO GÓMEZ was born in Miraflores, Boyacá, Colombia, in 1932. His poetry books include: Restauración de la palabra, 1969; El continente de los muertos, 1975; Movimientos sinfónicos, 1980; El viajero innumerable, 1985; Historia baladesca de un poeta, 1989; Las claves secretas, 1998 y Faro de luna y sol, 2002. Essay books: Ensayos de crítica interpretativa,-T.Mann, M.Proust, F. Kafka-; y Reflexiones y esbozos,- teatro, crítica y poesía en Colombia, among others. He studied Literature and Dramatic art in Germany. He also directed the Publications section of Colcultura and is co-founder, alongside Pedro Gómez Valderrama y Arturo Alape, of the National Union of Writers. He has been a European Literature professor for 30 years in the University of Los Andes and has taught at other universities such as Javeriana, ENAD, Pedagógica and Universidad Nacional. He translated El preceptor, a play by Brecht, and some poems by Goethe, from the German language. According to Guillermo Martínez González: “Seen as a whole, the work of Eduardo Gómez atracts because from it´s beginning it accomplishes a mature expression, a language that doesn´t disdain metaphors, at times surreal in nature through the wake of Neruda, it has been a guard of reflexive restraint, coherent in the persistence of obsessions that like the night, death, urban life, violence, marginal solidarity, have evolved from an atmosphere of acierated sarcasm, until the calm tone of the last books, in which experience and history impose the free balance of domination.