I propose you to let me wake you
slowly, very early
as if this caress, that goes all the way
to your feet from your hips
had come from very far,
from my parents.

Since the sun has already arrived from its journey,
I shall place my hands on your face
to make all the fear and rage go away
and thus you will see that during my absence
the seeds we planted
are now giving shade. 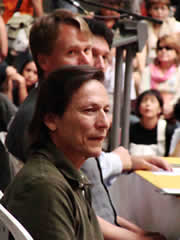 JORGE IVÁN GRISALES was born in Medellín, in 1956. Poet, playwright, actor and theater director. Member of the Taller de Artes (Arts Workshop) of Medellín. Professor at the Escuela Popular de Arte de Medellín (School of Popular Arts, Medellín) and the University of Antioquia. Publications: Los versos del nadador ciego, 1997 and Método para el manejo de la voz escénica: De la memoria de la voz a la imagen de la palabra, 2006. Juan Manuel Roca says: “In Grisales there is a fortunate attempt of trapping shreds of his roles on stage, in this occupation that demands ductility and, of course, the ability to create imagery. But here his images do not need a gesture, a platform, or even the body in which we are actors, directors and even a crowded audience. Because the poetic word is a detachment from the body that dictates states similar to dreaming. (…) Jorge Iván Grisales´ poetic journey is similar to a sleepwalker´s: to lay words out like a tense thread on top of which we cross over emptiness. It doesn´t matter if the protective net is torn. As all shepherds of emptiness, the poet knows that the ground wants him. It is about an adventure that has remained silent and that, every now and then, in many of his poems, points us towards the glimmer of light that a blind swimmer leaves behind, on water and paper.