José María came riding a bus, across la Oroya to Lima,
Listening to Lou Reed through his earphones
Out there the soaked mountains, the rain penetrating,
Inside of him through the bullet hole
That mix of Perfect Day and the falling rain added nostalgia
To the crystal-clear vision outside the window
He remembered then how he used to sleep on his skin as a child
He learned Quechua
Songs ever sadder than Lou's
The mountains and their mines were no longer
A dwelling places for myths
Mountains looking as Huarochiri
And smoke coming out of the chimneys
A ghost train went into an old tunnel
The rain as sepia as harp strings tingled his bullet hole,
Then he wondered
If in fifty years this country would still be there
This thought embarrassed him
He tuned in for a different song, something of-Pastorita-
And just when he started to get the hang of it, he fell asleep
The road wound ahead and cuddled him
-Hey, kid-, they said, -go back home.-
But his mother died.
-This isn't your language, kid.-
But he sang on the bus:
I still can't my hometown mountain,
I'm a foreigner
I'm spirit wandering along the river
I have a gun in my holster
My heart, a tinya drum, a charango and a quena flute.
On, the river has taken my heart
And I still can't see my hometown mountain.
Jose Maria used to sing in Quechua with his wooden guitar
But deep inside
In the entrails of his voice, the dancers already counted theirs steps
Death is a wound you bear since birth
Death is a spirit that keeps you company:
A feeling of nostalgia, a country
The child that sang in the river called to his mother
To save him
That child feared that his heart would be taken away
That in fifty years nobody would sing their songs in Quechua
For his country had mountains and shiploads arriving at the seaports,
All was plundered, all was pillaged
The scenery of famished dogs that was announcing his arrival in town
Blended the sweet melody of his voice with the loud sound of a bullet
His friends loved him
But everybody else didn't understand Quechua
Nor did they want to understand,
-country folk stuff- they said
They who now publish his books, study him, celebrate him.
Jose Maria, the day you put that gun against yourself
Somebody was playing his violin on the heights of Andahuaylas
They expected you to do so to make a legend out of you
The big cultural legend of our country.
They, who spitted at your songs
You took the gun with a hand, I was born
When you were saying your farewells
Three days before you sang at get-together with friends
Someone recorded your voice and the recording was a joke on death
That always sneaked behind you it is was your victory
Over an offspring of intellectuals
One day before you went shopping for huayno
Records in La Parada
We got drunk listening to Jilguero
-I'll see you tomorrow, you are born and I die-, you sang
You would have had a flashback, your childhood among
The indigenous folk,
A class at university, or something like a broom
That would make you doubt at the beginning
But push you forward instead with unrefrainable strength later.
Jose Maria, a woman is singing on the corner of my street,
She comes from Ayacucho
Will I be in her song?
Will my poems be in the palm of her mud-stained hand?
Jose Maria, you used to sing rock in Quechua
At the bottom of my grave
I'm writing this to sing in you. 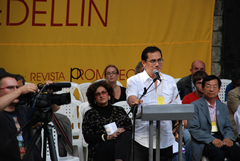 MIGUEL ILDEFONSO was born in Lima, 1970. He studied Literature at Catholic University of Perú and did a Master son Creative Writing at El Paso University, Texas. Poetry books: Vestigios, 1999; Canciones de un bar en la frontera, 2001; Las ciudades fantasmas, 2002; m.d.i.h., 2004; Heautontimoroumenos, 2005; Los Desmoronamientos Sinfónicos, 2006. Libros de narrativa: El Príncipe, 2004; El Paso, 2005 and Hotel Lima, 2006. His texts have been published in magazines in Peru and abroad such as: Hueso Húmero, Ajos & Zafiros, Pterodáctilo y Lucero. He collaborated with magazines like Imaginario del Arte, Sieteculebras, Flecha en el Azul and Distancia Crítica. He directed the virtual magazine El Malhechor Exhausto and co-directed Literatura Pelícano. In his essay Las ciudades fantasmas, Javier Agreda says: In the work of Miguel Ildefonso we can find fundamentally two subjects: the description of modern urban life and the reflection upon his own poetic work... Las ciudades fantasmas (The Ghost Cities) is a group of texts in which a narrator, the poetic self, confronted with urban life´s violence and “being a prisoner of the body”, decides to take refuge in poetry. Ildefonso tries to find the midpoint between opposites such as narrative and poetry, autobiographical and book-inspired, descriptive and reflexive, everyday speech and literary quotes..."