In my port gazing at the river
The sparrow hawk passed by
The heron passed by
The cashew bird passed by.
The wave passed by undulating its look
and in a minute of centuries-
told me while crossing the river
how the peoples were liberated. 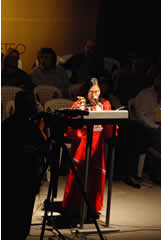 MORELA MANEIRO was born in Ciudad Bolivar, Estado de Bolivar, Republica Bolivariana de Venezuela, on August 19th, 1967. She is part of the Kari`ña indigenous community. She coordinated the national alphabetization program known as "La Misión Robinson" in the communities of the Estado de Bolivar. From age 11 she has been involved with social development movements and, through her art, she has interacted with several cultural educative institutions. She has participated in leadership courses on environmental defense and has also worked in workshops, seminars, photographic and handmade object exhibitions and literary festivals that praise indigenous culture; in addition to these activities, she has been an activist of indigenous politic and in exercising this activity has been postulated as candidate to the National Assembly (2000) and the Estado de Bolivar Legislative Council (2004). She has given several interviews to the national press and various radio shows, and has acted as moderator in a show on Venezuelan television (channel eight’s “Canal Abierto”). She has given conferences and educational conferences and has been invited to variousregional interest congresses in Venezuela, Guatemala, Mexico, Ecuador, Puerto Rico and Peru. Through her formation she aims to strengthen interethnic sociopolitical, cultural and philosophic exchange and to defend the indigenous woman autonomy regarding territorial, environmental, ethnomedical and educational habitats, as well as defending fundamental human rights. She received the first prize of the Bilingual Literature Contest for her work “Ojos de Hormiga” (Ants’ Eyes), featured in the first edition of “Kuai Nabaida” (The Upper Sea, 2006) granted by the Venezuelan Ministry of Culture’s Fundación Editorial El Perro y la Rana (Editorial Foundation The Dog and the Frog). She is currently the president of the Marakawa Foundation, through which she supports the struggle of indigenous people to reconquer political and cultural relevance. In the words of Adalys Javier, "... the poetry of Morela Maneiro is deep, mystical, progressive, emancipating and revolutionary". “I was doing like the ant, going through labyrinths of earth and I began to recognize the stages and I began to see how deep it is to know oneself”