Better we go, people here don't like us,
mount the silent beast of this time.
We may get lost in its creases,
because of the debris of a sunken ship
in any fragment of tinplate.
To flee through the crack of time in space,
among the flames of noon or through a wound of the sun.
To mount bareback the wind where we threw the seed,
on this beach of Santa Marta from where he who plowed the sea fled.
To abandon this abyss where the sun dies,
to flee from these flames waving like the lash
of lost time.

Colombia is a girl we all torment,
time is the clapping of its hands, and the sun a menace.
Even the fog seems to come from down under,
from the dark entrails of the holocausts,
of mire and the impassable lianas that welcome us.

And my girl asks how has this day has been,
and I dodge the answer with a play of words,
with any play, for we all play at nothingness.

And all the same I see a front of light.
And I tell her that today
when the sun streaks the day with its golden lances
we look at the horizon for the millionth time
in the warm wind of the clear months. 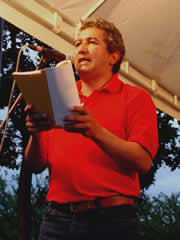 ÁLVARO MARÍN (Colombia, 1958). He has won several prizes for his poetry, studied zootechnics and now works in Communications and as a media and culture researcher. As an essayist, he writes about literature and the Colombian political scene. He has published two books of poetry and two of essays, and often writes for the national newspapers. Álvaro Marín has been influenced by César Vallejo, Miguel Hernández, José Lezama Lima and Luis Cardoza y Aragón. His poetry is a sum of strange images and supernatural voices, haunted by the figures of a harsh reality. Marín’s poetry is, as Lezama said, “the sacred challenge of absolute reality”. It is complex and difficult, touching and fascinating us, and opening up a dialogue within a ritualistic ceremony. It invites us to join in a solemn procedure full of tension, where banishment and prison are part of the narrative. // The poet describes his writing as “my ancient voice broken by powder”. It projects his “unfathomable silence”, a spiritual adventure that uses only the precise sign, the voice exploring hidden possibilities in the visual and dramatic elements of reality. He looks for the root, the invisible other half of facts and expresses it through powerful suggestion. His poems also demonstrate an affective crescendo, a widening of meaning, thanks to the emotive and metaphorical force of his language. // Emotion, perception, language, landscape, mystery and enigma are all affected by meanings derived from history and its development, which at the same time provide a space for utopia and renewal: Under a red sun the march goes on, // we are a vehement people, // rough like the peoples // descended from Abraham. // Besides being a journey through language, his poetry contains an intense interior life; its phrases are clear, vivid, meaningful and complete in themselves. The writing comes from a movement that casts history under a new light through mythological visions and poetic illuminations, because history, past and present, takes place in the imagination through the leading effect of memory. Each word retains a memory and language is charged with phantoms: “Our house is a history of devastating winds and bloody summers.” // “Man will come after the wild beast”, he predicts. Or he asks a disturbing question: “Why would we be forced to slide down these slopes of death?” Intelligence and imagination are united in his poetry; the remembrances or historical reconstructions it gathers expand, merging present and past into a rebellious totality, through a complex perception that breaks with our usual vision of the world. // Marín’s poetry demonstrates an alternative understanding of the human drama, an alternative to the origin of our condition as wandering, disinherited men and women, because “it is not the light of summer nor the aura of the rising sun, it is the candle of the forgotten ones lightning the street.” Or as he wisely says about his poetry: “It is a word born deep in the blood… [because] I etch the names of the fallen men.” (Gabriel Arturo Castro).