That native you see, sir,
is not the one
on tourism brochures
carrying bulges around
or waiting on your table.
Neither is he the one you peek at
begging for spare change, as a juggler
nor he who speaks that very "other" tongue
and withstands the cold at night.
No, that native is within,
and sometimes he wiggles his way out, face it,
even if you bury him with last names,
even if you bury him well
and deny your little birth mark,
he's there, face it.
And if that stale water should appear,
voracious, the inflammatory liquor
will seep through, you'll see,
that native who pushes with centuries's strength,
surfaces burning and he comes out,
with things hidden,
things that keep hurting.
No, he's not another,
that native is me,
come on, repeat after me. 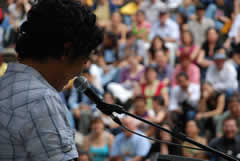 ALAN MILLS was born in Guatemala, 1979. Poet, essayist and translator (English and French). Poetry books: Los nombres ocultos, 2002; Marca de agua, 2005; Poemas sensibles, 2005; Síncopes, 2007; Testamentofuturo, 2007. He has participated in many festivals in Latin America and in the V  International Festival “La poesí­a tiene la palabra" organized by Casa de America in Madrid in 2005. In 2007 he was invited to various festivals in Peru, Brazil and México. Some of his poems have been translated to English, German and Italian. He edits several alternative projects (www.guatattack.com). He is the Director of the  Latin American Web magazine of poetry Rusticatio (www.rusticatio.com) and collaborates with diverse publications in Hispano-America. He has been a grantholder at the Ministry of Culture in Madrid. " Like the lighting of an amazing possibility, new great poetry is emerging in Latin America, the new great Literature, next to the renewed nightmares. If  we can still speak of a continent it is because those new poets exist, and they do as noone could have foretold. Alan Mills is one of those great new poets, and he demonstrates that these countries that are victims of everything are writing as if there was still a soul, as if still a body existed, as if still, in synthesis, there was the contingency of a soul looking for its body. "Síncopes" constitutes the extraordinary poem of a violation, a permanent violation and, simultaneously, one of the most ferocious and hallucinated samples of the great Latin American poetry of today ". (Raul Zurita).