In which I can only see the abyss
In which the whole word will sink
A black hole in which there is nothing but death
No glimmer whatever, no ray of hope

I would follow them farther than the most distant point
We would remain together for all eternity
An eternity only I understand
Because my eternity is my present time.

However I died that day
Those 100 days without an answer from on high
Made me doubt of its existence
Even holding in contempt those who showed it to me. 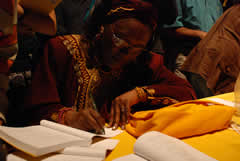 YOLANDE MUKAGASANA was born in Rwanda in 1954. She survived the Rwandan genocide of 1994. She lost her three children as well as her husband, brothers and sisters. In memory of the genocide and with a view to assist the reconstruction of the country, she wrote three books entitled La mort ne veut pas de moi (Death does not want me), N'aie pas peur de savoir (Don't be afraid to know), and Les blessures du silence (Wounds of Silence). Today, Yolande has formed a new family by adopting three of her nieces who were orphaned in the genocide. She built a new house where she used to live in Rwanda and looks after around twenty orphans. She created the Association Nyamirambo Point d'Appui, Foundation to Remember the Genocide and Assist the Reconstruction of the Country. The head office of the Association is in Brussels while the Rwanda counterpart is an NGO called Nyamirambo Point d'Appui which aims to support the regeneration of the Rwandan social fabric. Yolande Mukagasana devotes her time and effort into informing and educating people on living together in the midst of differences, and gives conferences in schools and associations. Among the many awards she has received are the Alexander Langer Foundation Testimonial Award, in Italy (1998); Award for International Understanding Between Nations and for Human Rights conferred by the European College of the Iena University, in Germany (1999); The Peace Golden Dove Award conferred by the Archivio Disarmo Association of Rome; Woman of the 21 st Century for Resistance Award, in Brussels (2003); Honourable Mention for Peace Education by UNESCO, in Paris (2003). Yolande Mukagasana has co-authored the theatre play entitled Rwanda 94 in which she plays her own role. Publications: La mort ne veut pas de moi, éditions Fixot, 1997; N'ai pas peur de savoir, Robert Laffont, 1999; Les blessures du silence, Actes Sud, 2001.