Who can acknowledge this body?

This neck strangely twisted
legs and arms and mouth in the mire?

Who can be reduced to such complacency?
This utter softness
as they rip of his clothes
his glasses
his papers -

I am a collaborator
language is my law
I will do fine by silence
but my mouth is unruly
wading into history
tossing sentences and formulations onto the page in chaotic patterns
under my breath I whisper:
these hills are on fire
these streets are on fire
my will is on fire
my chest is on fire
my hopes are on fire
my writing is on fire - it is
an ever burning
ever changing flame 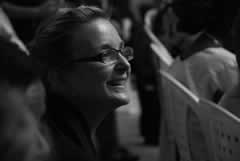 TALE NÆSS is a norwegian poet and playwrite born in Bærum march 22, 1969.   Næss has a major in film-science. She grew up in Trondheim were she was the resident of Trondheim City Councils writers house during the period of 1997–2002. Her prose debut was in 1992 with the novel Månen har ikke hender/the moon has no hands. Since then she has written poetry, novels and drama for film, radio and the stage. She wrote the libretto for the church opera Madonna Furiosa in 2005, and this critically acclaimed opera has been performed both nationally and abroad. Næss is today one of Norway’s most interesting playwrites and her work is currently being translated into German. She has also done a series of installation work and she has been a guest at exhibitions and festivals in Norway, Sweden, Denmark, Poland, Finland, Greenland and Egypt. Her current collaboration with the group Kassbøll/Duch duo has lead to several concerts and they will be touring Norway with the support of Norwegian Culture Council this august. Through her readings, her poetry and her installation work, Næss has developed a fascination for the human voice. This has transferred into her libretto’s and radioplay’s where the expressiveness of the human voice and the musicality of sounds take a central place. Several of her works explores the field between the performing arts, literary works and the visual arts. In her world to address somebody else is a way to express our humanity. In this way of thinking, the voice becomes a vehicle for addressing “the other”. Næss is currently working on a combined prose and performance project based on interviews done on several journeys in the Middle-East in 2005 to 2006. The result will be performed in collaboration with the actor Trond Peter Stamsø Munch and the composer Jovan Pavlovic with its opening night in Trondheim on the 23. of October 2008.  Tale Næss has had a number of texts published in literary magazines and anthologies from 1988 to 2008. Her last publication was an essay on the text and the human voice in the literary magazine Ratatosk September 2007. In the anthology Film og Følelse  / Film and Emotion november 2007, at Gyldendal publishing house. Tale Næss has since the summer of 2007 been running the production company NOOR productions ans together with her husband, the actor Trond Peter Stamsø Munch.