I am not returning to you

In seven days
It will be over. 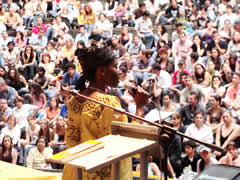 JULIANE OKOT BITEK is a Vancouver writer who was born in Kenya in 1966 and raised in Uganda. The first time she had a poem published she was eleven years old and she has never stopped; now branching out into short fiction, drama and non-fiction.  She graduated with a Bachelor’s Degree in Fine Art (Creative Writing) in 1995 from the University of British Columbia. Her writing has appeared in several literary magazines including Arc, Whetstone, Fugue, and Room of One's Own. She has had several writing acknowledgements, her short story "Going Home" was an award winner at the 2004 Commonwealth Short Story Contest and was featured on the BBC and CBC and her essay, War No More, won first prize in the post-secondary essay competition in 2005.  She says: ““War no more” is a rallying cry that emotes the frustration that we feel, as witnesses to the seemingly never-ending wars that continue to inflict pain and destruction the world over. We are tired of war. War no more means that we must stop engaging in warring. We must redirect our energies into the creation of peace.  (…) This earth, this place is ours. “War no more” is more than a rallying cry to stop the fighting, the misery, and destruction. “War no more,” must propel us to make peace with ourselves, turn our energies to serving and preserving and making available the fruits of the earth to all citizens.” Another essay On Iris Chang’s Rape of Nanking also won a special mention in 2006 and is included in an anthology of winning essays from that year.  In 2007, Juliane received a Canada Council grant which has allowed her to spend time writing a collection of non-fiction.