They four also had the face of an eagle
Ezekiel

He knew when the horror was going to begin 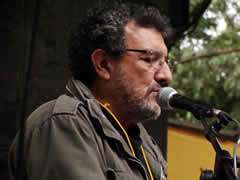 ARMANDO OROZCO TOVAR was born in Bogotá in 1943. He studied journalism in the Universidad de la Sabana, and is currently a professor of Humanities, Literature and Philosophy. He won the first prize in Bienal de Poesía Novel de la Provincia de La Habana, Cuba, in 1974. He won  the first prize in the National Poetry Contest held at the Universidad Central in 1981. His published works include the poetry books “Asumir el tiempo”, “Dealing With Time, 1980”, “Las cosas en su sitio” (Everything Has Its Place, 1983), “Eso es todo” (That’s All, 1985), “En lo alto del instante”, (At the Height Of The Moment, 1990; “Para llamar a las sombras” (To Call The Shadows, 1994). Luis Vidales said in the prologue of his first book: “ It’s not about simply making new poetry these days. That’s ok. But everything depends on the strategy used to grasp the reader. And Orozco gets him with the enchantment of a very straightforward and conversational poetry, full of familiar accents, from which the grandiloquent resonance of old school versification has fled”. And in the words of Ricardo Sanchez, “This poet is not in any anthology that I’ve read, nor does he belong to any literary group. He has spent his talent in occasional poems, very festive and political. He’s a survivor of the long road walked by left winged political idealists of the Sixties. Armando Orozco knows a lot of stories of that miserable and heroic, real and fantasizing life, that need to be recovered in their analytical and human dimensions. When he tells the story you can hear a madman speaking. He’s a nineteenth century fabulist.  He’s one of the actors of such times and is full of corrosive irony towards himself, his actions, his time and its actors”. And as Federico Díaz Granados said, "Armando Orozco has managed to create aesthetic fact and to find poetic fact, in the wonder that comes from the soul of man and which portrays the same desolated man, touched by an angel, by the wings of death and defeat, conscious that only through creative freedom and the mystery of words it is possible to know the essence of life and its manifestations”.