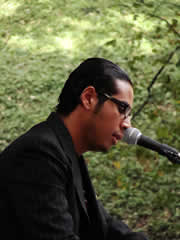 VÍCTOR MANUEL PINTO was born in Valencia, República Bolivariana de Venezuela on June 14th, 1982. He has a B.A. in Education, Language and Literature from the University of Carabobo. He works as a Publications Assistant for the Department of Literature, Cultural Direction, University of Carabobo. He founded the Literary Group “Litterae ad Portam” and is currently acting as the director of “La Tuna de Oro” (The Golden Prickly Pear) magazine. He belongs to the Board of Directors of the International Poetry Meeting and the National Meeting of Young Poets, both held at the Carabobo University. . Hhe’s an advisor of literary workshops held by the Casa Nacional de las Letras Andrés Bello. His published works are “Aldabadas” (Knockers, 2005) which won first prize at the CONAC Arts & Letters Contest and the Ministry of Culture’s A Book for Every Day Contest; “Mecánica” (Mechanics, 2005), Which one first prize at the International Poetry Contest Ciudad de Valencia and “Aprendiz de la Carne” (Apprentice of Flesh, 2007), which won the only award in the first Bienal Eduardo Sifontes organized by the Gobernación del Anzoategui. His works have also been included in the “Amanecimos de Bala: Panorama Actual de la Poesía Joven Venezolana” (Awoken by Bullets: Present Panorama of Young Venezuelan Poetry, 2007) and Deleite Literario III (Literary Delight III, 2008) poetic anthologies. “I chose an education major right after choosing a technological career that had nothing to do with poetry, but it was that experience that helped me write a book called Mechanics”, he says. Mecánica (Mechanics), according to its author, is a sequel to his earlier work Aldabadas (Knockers), in which he depicted a very familiar environment and evoked scenes form his childhood. With the maturity he has gained, he has tried to alert of the fact that  the poetry that is taught in schools is boring and obsolete, which is why he has proposed that the Universities should redefine the literature study programs. He has participated in the last four International Poetry meetings, held at the University of Carabobo. According to his opinion, what's important about poetry is the connection it generates, the human interaction “Books and poems are the result of individual or collective quests. Poetry is the search for answers that will never be revealeed. True poetry should generate disquiet, should generate questions.”