After having furrowed, grown and enriched
the worm comes out loving his home
It swells up under the sun
it wriggles, it shows off
it sacrifices itself
In its slimy thundering
the cry of the earth is heard 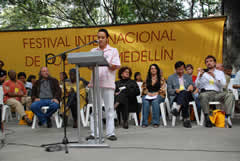 FELIPE POSADA was born in San Carlos (Ant.) Colombia, in 1985. He is currently a student of sociology and music at the Universidad de Antioquia, where he develops several theoretical – practical investigations in art and recreational arts as starting point for human awareness by conducting poetry, theater, dancing, masquerade, reading and writing workshops. He’s a member of the social and environmental art and culture experimental group TONÉ and of the musical group “Tierra Libre” (Free Earth). He is also part of the coordinating staff of Prometeo Magazine’s Gulliver Workshop for the awareness of children from the Medellín’s “comunas”. His poems have been included in magazines and exhibitions. After living in his native town during his childhood, his family was forced to move to Medellín because the Colombian conflict worsened in that part of the country. This moving marked his existence and is reflected in his poems, where it is possible to find a longing for the land and the fields, for the encounter with Earth and the elements, his own uncertainty of the city, his country’s conflict and human action and thought. His unpublished book “El Día A Su Degüello” (The Day Of His Beheading) not only shows the anguish of a young man trying to find a place to hide, trying to create among destruction, trying to criticize and denounce vetoes, trying to love where it’s not allowed to, trying to find the natural in the artificial; but it also shows what it’s like to uncover oneself before things, to be a part of what he wants by accomplishing it with a lot of effort and by discarding the things that held him back, to write a poem and let poetry flow, to leave his print in the land that he walks on, and to simply be one with everything.