In the year 2062 Halley's comet
will appear again in the skies of Chile
At that time I Jaime Quezada
survivor of so much history
Will be in the shadow of an atomic cloud
Scratching myself with what's left of a rooftop amidst the ash
Or sitting down in a rocking chair of neutrons
In the shade of a new apple tree in bloom
Remembering my father's childhood
When a picture was taken of him getting off a horse in 1910. 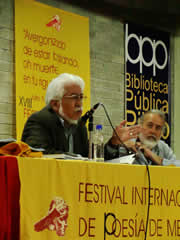 JAIME QUEZADA was born in Chile in 1942. Poet, essayist and literary critic. He studied Law and Literature in the University of Concepción, where he founded the literary group Arúspice and the poetry magazine of the same name. Author of Poemas de las cosas olvidadas, 1965; Las palabras del fabulador, 1968; Astrolabio, 1976; Huérfanías, 1985; Un viaje por Solentiname, 1987; No liberto hombre, 1991; Escritos Políticos, 1994; Por un tiempo de arraigo, 1998; Bendita mi lengua sea, 2002; El año de la ira, 2003; Adamita, 2003; Llamadora, 2004, Gabriela Mistral: Nuestra América 2005 and Gabriela Mistral una manera de vivir, 2007. He has studied and researched contemporary chilean literature (specially the life and work of Gabriela Mistral, Pablo Neruda, Nicanor Parra, Gonzalo Rojas and Jorge Teillier). He was the president of the Chilean Writers Society (1989-1992). In the present he is director of the Poetry Workshop of the Pablo Neruda Foundation and president of the Gabriela Mistral Nobel Prize Foundation. For Iván Carrasco Muñoz, of the Austral University of Chile, “Jaime Quezada´s poetry arose under the frame of a given tradition (poetry of locations and antipoetry), incorporating elements that respond to a particular vision of the world. He has sung of everyday things, childhood, family, nature, loneliness. But in the developmente of his work he has destroyed that initial image, demystifying the magical childhood space, looking at the landscape with the eyes of a botanist and an ecologist, assuming a religious perspective, contemplative, prophetic and announcing the sin institutionalized in the world, the danger of humanity´s total destruction, and Chile´s historical contingency. Without a doubt, Quezada´s poetic work is a valuable contribution to contemporary literature. (…) The apocaliptic and prophetic tone of his poetry grants it a differential character in present Chilean poetry.”