I remember how high he
flew his kites
at the beginning of the year.

He was a dreamer.

Once he put on a tie
He died,
such a pity. 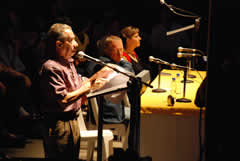 BENJAMIN RAMÓN was born in Panama in 1939. Benjamin studied History and Philosophy at Panama University. He has devoted his literary career to short stories and poetry. He is a member of the Central American Community of Writers. He appears on the Critical Anthology of Young Panamanian Narrative México, 1971 and Rebellious Poetry in Latin America, México, 1979. He has earned distinctions in national and international contests for his poetic and narrative work: Cundeamor, short story, 1966, Honorable Mention in ESSO Awards of Panamá;  Sólo el mar, 1968 Honorable Mention in Young Poetry Games of Peru; Camión, 1972, University Award of Poetry; Amanecer de Ulises, 1983 y Las Ilusiones Perdidas, 1987, both Prize of Summer Poetry of the National Institute of Culture of Panama, and Música Sabida, Finalist of the Miró Poetry Award, 1991, published in 2001. Poetic work: Puta vida o Esta ciudad que mata y otras alegrías, 1969; No trespassing, 1973; El mundo es más que el hombre, 1977; Árbol, mediodía, 1983; No olvidemos y otros poemas, 2001. Two short story books: Contra reloj, 1992 y En un 2 por 3, 2007. Since 1999 he edits Camino de Cruces magzaine. Mario García H. says, “the book of poetry Puta Vida is a text that mixes facts of national and international occurrences in it’s discourse. In this fusion language seeks to express concepts of the poet´s and the country´s everday life. From the historic perspective, the verses mark certain social issues that happened in Panama, from the second half of the nineteenth century until 1968.” And according to the editor Luis Eduardo Henao: “Benjamín Ramón´s poetry, not only has an emotional function but can also contain a background of struggle and a political message, like in those contained in “No olvidemos” (Let us not forget). The country in the conjuncture of the end of the century offers the appropriate occasion and spaces to collectively remember  dates, places, names, dreams and fears that support the efforts of history and, whether we know it or not, move us and encourage us.”