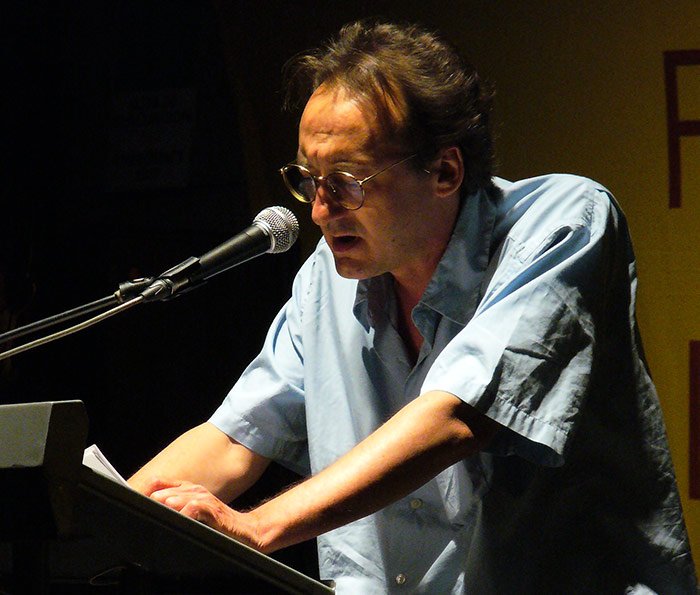 The dust blocks the nostrils. Dust covers
all that, for lack of movement,
takes over some space: streets, squares,
daring decolletages, cheeks, books.

Dust envelops cedars, statues, minarets,
palaces. It fills the hand of the beggar,
it blocks the city drainage
Dust puts a blindfold on the eyes.

Everywhere, dust. Dust in the silk-stockings
in the café, in the eyebrows, in the tongue.
Dust meddles in all colors,
in the rain, in our conscience.

voices, the city, dry up. Dust
spreads on the shoes, on
words, on thoughts. Dust goes through
the eye of the needle, and on to death. 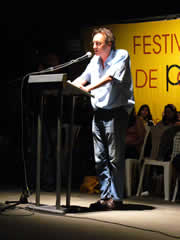 ARMIN SENSER was born in 1964 in Switzerland, in the city of Biel. He studied Philosophy, German Studies and Linguistics in Bern, Switzerland’s federal capital. He published his first poetic anthology in 1999 under the revealing title Großes Erwachen. This inaugural work won the Bern’s Book Award and the Liric Debut Award, sponsored by several cultural foundations based in Germany which promote german speaking new poets. In the words of writer Jürgen Becker, Senser’s poetry of manages to crystallize what he himself defines as the fundament of poetic creation: "what all work needs, in order to endure, is to condense the past in its totality". The new poem distances itself from everything that has been written before only by allowing it a silent participation. This way, Senser fulfills the need of not repeating what has always been said, while renouncing simultaneously the false principle of "originality". After Großes Erwachen, Senser’s poemas have been published in several Swiss and German poets anthologies, such as Lagebesprechung: Junge Deutsche Lyrik, Swiss Made: Junge Literatur aus der deutschsprachigen Schweiz and Die schönsten Gedichte der Schweiz, as well as in his own anthologies. In his book Jahrhundert der Ruhe (Century of Tranquillity), which appeared in 2003, he takes on the risky enterprise of traveling between tradition and the current western spiritual world. Kalte Kriege is his last work, published in 2007. In it, Senser, conjugating poetry and thought, directs his ironic glance to the new century. Armin Senser has live in Berlin since 1998. The poet also works as a translator, playwrite and essayist.