Its good that grass is still green here
and the features in faces are not
so tight that they would
exclude amazement
A roach under its hard shell
Scurries, sudden and brave,
straight toward the speaker
across the parquet that becomes
a desert Against phonemes as
ancient as or O made of thick 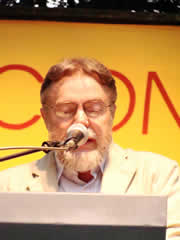 JÜRI TALVET was born on December 17, 1945 in Pärnu (Estonia). A graduate of Tartu University in English philology (1972) and a PhD by Leningrad (St. Petersburg) University (1981, he has over several decades taught Western literary history at Tartu  University. He has also been the founder and the director of Spanish studies there (from 1992/1993). He has been active as a translator of (mainly) Spanish and Latin-American literature. As a literary researcher, he has published Hispaania vaim, 1995 and Tõrjumatu äär, 2005, as well as more than a hundred essays and articles on literature and culture in Estonian, Spanish, Russian and US magazines. Talvet was awarded the Estonian Annual Prize of Literature in 1986, the Juhan Liiv Prize of Poetry in 1997, and the Ivar Ivask’s Memorial Prize for poetry and essay in 2002. // Works. Poetry: Äratused (Awakenings; 1981), Ambur ja karje (The Archer and the Cry; 1986), Hinge kulg ja kliima üllatused (The Soul’s Progress and Surprises of Climate; 1990), Eesti eleegia ja teisi luuletusi (Estonian Elegy and Other Poems; 1997), Kas sul viinamarju ka on? (Do You Have Also Grapes?; 2001), Unest, lumest  (From Dreams, from Snow, 2005); Elegía estonia y otros poemas (Valencia, 2002, a selection of poems in Spanish translation). Essays: Teekond Hispaaniasse (A Journey to Spain; 1985), Hispaaniast Ameerikasse (From Spain to America, 1992), Hispaania vaim (The Spanish Spirit; 1995), Ameerika märkmed ehk Kaemusi Eestist (American Notes or Contemplations of Estonia; 2000), Sümbiootiline kultuur (Symbiotic Culture, 2005), Tõrjumatu äär (The Irrefutable Border; 2005); A Call for Cultural Symbiosis (Toronto, 2005, an essay book translated into English by H. L.Hix).