aaah! we shall never know how to fight against this cry
echoing within ourselves.
Ceslaw Milosz

and what is that cry? is it the uproar of sorrow? is it the noise of anxiety breaking down? of bones breaking? of green wood of life cracking in the flame?
is it our being exhausted bursting out? or does it come from beyond the others a sum of all the blunders nightmares ghosts that go through our breast and amplify the murmur of so much reviled and betrayed blood?
destiny grinds dreams longings desires and makes this cruel fracas not letting us look serenely at the morning or extend our hand to freshness of air. the cry is an attempt to order life, a tremor of sense wishing to find its adjustment existence is a mule that can no longer bear its burden and lets it go or breaks it everything begins with a cry: big bang or weeping.
the woman in labor the newborn the condemned the executioner's conscience the moribund the physician's impotence the gasp of the one with no life left and the emptiness of the one who does not find death all let out cries
can this string of miseries and resignations this covetous accumulation of hours days vegetable months this constant replacement of the clamor bursting out and the rush that unites and chokes be understood endured without the relief of that torn note?
we cannot silence the claim of our longings, the protests of our sorrows, the wailing of our defenselessness.
the cry is a monotonic and out of tune heartbeat but a sign that life still sends a desperate signal sent by hope.
that cry is not a cry it is a spell to redeem us from horror. 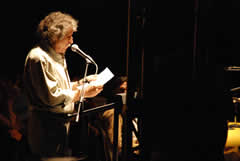 MANUEL GARCÍA VERDECIA was born in Holguín in 1953. He‘s a proffesor, writer, translator and publisher. He’s a bachelor of English and French language and  has a Masters degree in Cuban Culture, with a thesis on the 1930’s narrative. He has worked as professor in the Universities of Cuba, Canada, Czech Republic and Mexico. His essays talk about Cuban authors as Alejo Carpentier, Jose Lezama Lima, Gastón Baquero, Eugene Florit, Lisandro Knoll, Jose Soler Puig, Roberto Fernandez Retamar, César Lopez and Antón Arrufat, among others, and Hispanic American authors like Carlos Sources, Octavio Paz, Miguel Hernandez, Tomás Segovia, Máx Aub, Maria Zambrano, Jose Saramago and Jose de la Cuadra. He has published the essays Consecration of the Contexts, 1986; The Magical Word, 1991; the poem books Uncertainty of rain, 1993; Fibers, 2000; Thoughts of Ulisses Upon His Return, 2001; Ulisses Saga, and the short story collections Travels, 2004 and Wind Music, 2005. His most important translations include Disquieting Muses, a selection of Sylvia Plath’s poetry, in 2002; Intimate Strangers, a Cuban-Canadian poetry anthology, in 2004; Meridian, a novel by Alice Walker in 2004; Leaves of Grass by Walt Whitman in 2006 and The Prophet by Khalil Gibram in 2006. In 2007 he won the José Soler Puig Award for his novel The Day of the Cross, as well as the Julian del Casal Award for his poem book Man of the Sling and the Stone.