With my father I learned that before dying one should find one's mother.
With my mother,
That one dies without father and mother.

Inside the bouquet lives the garden and at its bottom another bouquet gets fixed.
After the loss the bouquets grow and also grow the bottoms
of the bunch.
But today nobody raises a garden with their own hands,
for only the act of giving is wished and its bottom is offered.
Nobody raises a garden and that's why we are full of bottoms and of bouquets.
It is impossible to raise a garden.
We are surrounded by its inhabitants, its scent and its bottom.
One goes alone to the date with their waiting-bouquet expectingto rise her.
She waits for the bouquet, for her first perfume.

I rose my mother dressed in her theatre gown.
It is impossible to raise a garden. 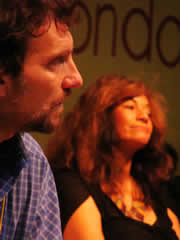 JUANO VILLAFAÑE was born in Quito, Ecuador, in 1952. He lives in Buenos Aires, Argentina, since 1955. Cofounder of literary magazines such as Tientos y Diferencias (1979) and Mascaró (1983). He has published poetry books such as Poemas Anteriores, 1982; Visión Retrospectiva de la Botella, 1987; Una Leona Entra en el Mar, 2000 and 2005. Jesús David Curbelo refered to “Una Leona Entra en el Mar” saying: “From his first poems, brief, colloquial, but poetically colloquial, the poet indicates some of the fundamental directions of his searches: love –equally relevant in both it´s sentimental and erotic dimension, for a female or a country, for family or memory in the shape of salvation, to perpetuate an individual- and social and political concern, expressed in every moment of emotional inner experience in which man, history and poetry merge together as an  indissoluble unit. Certain symbolical obsessions appear –horses, the sea, rain, the act of drinking, dreams, music, dance – that will be repeated throughout notebooks in an ascending spiral, in a broadening of it´s possible meanings making polysemy more suggestive and gives the text itself and the book in general new resonances…” In his poetry there is a wise handling of what Leo Spitzer would call “chaotic enumeration”, present in the voices of many latinamerican poets such as Huidobro, Borges, Neruda, Paz, and in Villafañe it accomplishes the task  of giving us sometimes unusual metaphysical and symbolical associations, that enrich discourse and the tropological atmosphere of the poems.