AFTER WATCHING A GYPSY
GIRL CRYING IN A CEMETERY

Years ago I was told about a secluded village in the mountains. A village of perpetual daylight, where the air was always cold. You can read a man's thoughts by the way he breathes they used to say. Or, Never look into a man's eyes - his mouth shapes the real answers. And it was true. You could understand a man simply from the shapes that came from his mouth. Children were taught before they could walk the importance of all that came from within. When they were in the terror years - those between childhood and adulthood - they were sent higher into the mountains to study at the University of  - every time you breathe a work of art should be pronounced.
It was here that our two lovers met. He was studying to breathe like a poet and she was studying to breathe like a sculptress. Obviously they fell in love and spent hours dreaming of the years of joy ahead of them - the years of art ahead of them. But one day when they were walking home a jealous peasant who had only learned to breathe ropes, still angry for being banished from school for his stertorous ways, dropped a noose from a tree and hanged the young man. That is about all there is to say. The girl can still be seen to this day beneath the tree where he sways - her mouth shut, needle and thread in hand. 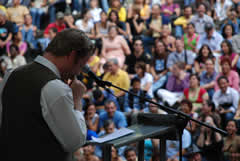 PATRICK WOODCOCK was born in July 12, 1968 in Canada. He has had numerous poems published in Canada, The United States, The U.K., and India this year - many of which were written in and about Colombia.  He was the poetry editor for The Literary Review of Canada.  His poetry has been translated into eight languages and he has attended poetry festivals all over the world. Some of his Publications: The Six O’Clock Club, 1996; AThElia, 1997; Scarring Endymion, 1999; The Challenged One, 2003; AWOL: Tales for travel Inspired Minds, 2003; Controlling Mastema, 2005; 13 Executions (chapbook), 2007 and Theatre of Panic, Poems, New and Selected. He is a member of PEN Canada.  He has been an English Language and Literature Professor in the Corr University, Ibague, Colombia and an ESL Professor in the Colegio San Bonifacio de las Lanzas, Ibague, Colombia. As well as being a teacher of ‘The Elements of Poetry’ and ‘Canadian Literature – The Northern Experience’  Sheridan College, Oakville, Ontario, Canada.