AUTUMN IN THE MIDDLE EAST

All the trees in the Middle East know it:
the earth will devour the corpses of the leaves
and the empty streets will overflow with yellow
in this autumn dressed in blood.

The children will die before winter
and I will not recognize myself in their eyes anymore,
the birds will have no place to nest
and the dogs no place to howl at the moon.

My tears have the same origin as the leaves;
the days soon will be the patina of silence.

Everybody knows it in this new war,
it is something innate in the heart of man,
in the rust stained heavens
where half of the Middle East is the color of death
and the other half is winter's merchandise. 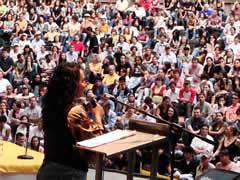 LINA ZERÓN was born in México, in 1959. Poet, writer, journalist and cultural promoter. Director of Linajes Editores and Café México Magazine. Her poetry has been translated into 12 languages and has been gathered in 40 anthologies, magazines and newspapers around the World. She has been awarded several prizes both national and internationally. She was named “Woman of the year 2002” for her cultural work and her distinguished poetic trajectory in the State of Mexico and won a “Guerrero Águila” also for her trajectory as a poet. 11 poetry books to her name, including: Consagración de la piel. 2007. Ciudades donde te nombro, 2005 Nostalgia de Vida 2005. Un cielo crece en el fondo de tus ojos, 2004. Vino Rojo 2003, Moradas Mariposas, 2002, Amoradas Borbolestas, 2001, Rosas Negras para un Ataúd sin cuerpo, 2000, Espiral de fuego, 1999,  2 novels and a book of short stories. Claude Couffon tells us about Lina: “As a french translator of her poetry, I can say that her writing has a unique strength, that every verse is so simple and at the same time so powerful without  moving away from the poetic aesthetic. Her poetry has an incomparable strength that comes from the colourful, unexplored horizons that only she strips with shrewdness, effectiveness and without reluctance. Her images are forceful. Her imagination is beyond comparison. Zerón is a poet as there are few, concrete, deep and at times of sublime metaphors. There are many elements that stand out in her art, I cannot mention them all but I would like to emphasize on one of them specially: the music of words that resonate as instruments sparkling in dark silences. The melody of her verses allows readers to receive her poetry and discourse even more. This is why every poem is a light…”