Pablo's voice knows
the red foot of the walls
and the whitewashed heights.

The house, peaceful station
of serene hours
of oblivion and glare
late arrivals
Reason oscillates
the morning embraces a folly

the rain might cease in the afternoon
perhaps the sun will water the flowers,
in the background
songs are heard,
the empty cage
a frightened shadow
the chest
a heart touches silk. 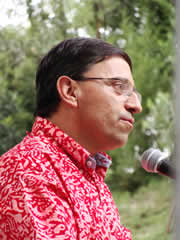 JOSÉ ZULETA was born in Bogotá in 1960. Director of the Estanislao Zuleta Foundation 1992 – 2008.  He directs the Literary Center “Voz Alta.” 2005 -2008. Director of the poetry magazine Clave. 2004-2008. Coordinator of the Literary Agenda of the Departamental Library of el Valle. He directs the program Libertad Bajo Palabra in the jails of Cali. Also he is an independent editor and cultural manager. Winner of the first national poetry award “Carlos Héctor Trejos”, Riosucio Caldas 2002, with his book Las Alas del Súbdito.  National poetry award  “Descanse en Paz la Guerra” with Música Para Desplazados, by the Silva Poetry House 2003. Second Internacional Poetry Award awarded by San Buenaventura University, with the book  Las Manos de La Noche, 2007. Other books: La Línea de Menta, 2005; Mirar Otro Mar,  2006 and La sonrisa trocada, cuentos,  2008. In the words of Elkin Restrepo, “…José Zuleta holds the ability to make the magic natural in things his own, without artifices or intellectual  rhetoric, which is what usually happens. His poems, clear, sensual, splendid, tied to small rituals and sudden perceptions to repeat oneself as a sentence, are moved by the grace of he who trusts every inquiry of the world to the senses and the power of immediate beauty.